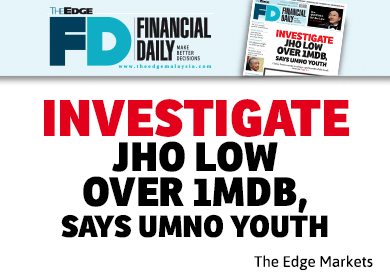 KUALA LUMPUR: Businessman Low Taek Jho (Jho Low) should be investigated and action taken against him if there is proof that he was involved in the misappropriation of 1Malaysia Development Berhad (1MDB) funds, Umno Youth said yesterday.

Referring to the front-page blurb of The Edge Financial Daily yesterday, Umno Youth exco member Ibdillah Ishak said that Low should not have accused Umno of twisting issues concerning the state investment vehicle, and labelled the party leaders as “spin masters”.

“The question that arises is who is Jho Low to seemingly blame Umno and label Umno leaders as ‘spin masters’?” Ibdillah said in a press statement yesterday.

“Who is this individual to say such things? Is Jho Low really involved and feeling guilty about this huge controversy?”

Ibdillah was commenting on Low’s interview with business monthly Euromoney, in which he accused Umno leaders of being spin masters in matters relating to the controversial debt-ridden 1MDB.

Low, who was accused of using his links with Prime Minister Datuk Seri Najib Razak to profit from the fund, had denied the allegation, saying that he had only advised 1MDB on certain matters and had no official role in it.

Low had also said he was under attack because there were attempts to divert attention away from the company’s bad performance and decisions which led to some RM42 billion in debts.

“It’s so frustrating ... I’ve never faced this kind of attack from all directions. It’s just crazy, and these Umno guys are spin masters, they know all this sort of nonsense,” he was quoted as saying.

“Have you ever seen one statement from anyone that talks about the simple governance of a company?

Excerpts of the interview were featured in Tuesday’s edition of The Edge Financial Daily.

Ibdillah said it seemed as though Low was trying to get himself off the hook by defaming Umno leaders through the interview.

“There is no need to defame Umno leaders when you are facing such huge problems. It is as if he wants to get himself off the hook.”

He also urged authorities to heed the suggestion by Umno Youth chief Khairy Jamaluddin, who earlier yesterday called for speedy investigations into 1MDB and Low.

Khairy was also responding to Low’s interview with Euromoney and had tweeted Umno Youth’s full support for Najib while calling for a thorough probe to be immediately initiated into Low’s role in 1MDB.