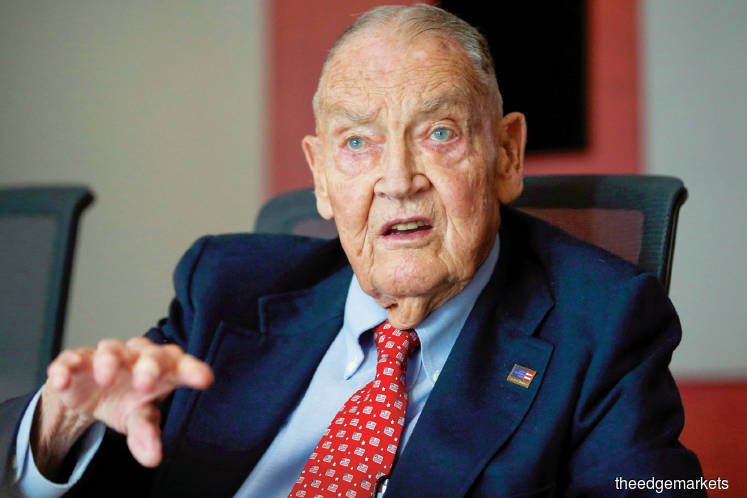 The Vanguard Group founder John “Jack” Clifford Bogle, who died on Jan 19 at the age of 89, is credited with starting the world’s first index fund. Here is a brief look at his career.

Bogle, who graduated from Princeton University with a degree in economics, was hired right out of university in 1951 by Walter L Morgan, the founder of Wellington Management Co.

Bogle worked in several departments before becoming an assistant to Morgan in 1955. He went on to hold several executive positions in the company before becoming president in 1967.

Bogle believed in two key tenets — low cost and diversification. He was an outspoken critic of the investment industry, which for a long time had charged exorbitant fees for executing trades and dispensing advice to investors. All of this, he contended, ate into the investor’s upside.

For Bogle, one concept flowed into the next — a low-cost investment strategy necessarily meant spreading one’s eggs across many baskets. Without the expensive luxury of active management (which he correctly suggested could not beat the market, in the long term anyway), the only other way for portfolios to perform was to have a balance of growth stocks for capital gains, steady dividend-paying counters and stable, low-risk fixed-income instruments.

These principles eventually gave rise to Bogle’s most ambitious investment innovation. However, he would first suffer one of his most disappointing career defeats.

The bear markets of 1973/74 caught Wellington off guard and its funds were badly affected. A management dispute in 1974 would see Bogle get the sack.

It was at this point that Bogle launched his grand experiment: passively managed, low-cost index mutual funds. He also proposed a new kind of mutual fund company — a client-owned firm that would provide administrative services to the funds at cost.

Barely a year later, in May 1975, Bogle launched Vanguard, with US$1.8 billion in assets under management (AUM) and a staff of less than 50.

Bogle realised that a fund’s operating expenses — legal, marketing, brokerage and portfolio advisory fees — severely undermined investment returns. “You get what you don’t pay for,” he was fond of saying.

Bogle was among the first to focus on how much management fees and transaction costs affected investors, according to Paul Haaga, a former employee of his and retired chairman of the US Investment Company Institute. “Commissions, trading costs, costs of every kind have got a lot more attention because of Jack,” he was quoted as saying in Fortune magazine.

According to Tom Saler, in a recent article in the Milwaukee Journal Sentinel, Vanguard has saved retail investors roughly a trillion US dollars in fees. Simply put, Bogle’s emphasis on reducing annual management fees ended up forcing the industry to follow suit. Between 1975 and 2017, the average expense ratio of equity mutual funds fell by nearly two-thirds.

Bogle brought index investing to retail investors in 1976, when Vanguard introduced the First Index Investment Trust, the world’s first index fund. It was widely panned initially, with detractors calling it “un-American” and “a sure path to mediocrity”.

However, the fund — now known as the Vanguard 500 Index Fund — is one of the largest in the industry. Index funds now account for three-quarters of the company’s AUM of about US$5 trillion.

Bogle led Vanguard until 1996, by which time the company had US$180 billion under management and was the second largest mutual fund company in the US. He remained on the board as senior chairman until 1999.

A prolific author, Bogle penned 12 books throughout his life, 11 of which came after “retiring”. Arguably his most profound work — Bogle on Mutual Funds, published in 1994 — was praised by fellow investment giant Warren Buffett as “the definitive book on mutual funds”.

The billionaire investor and CEO of Berkshire Hathaway summed up Bogle’s contribution to retail investors in his 2016 annual letter to shareholders: “If a statue is ever erected to honour the person who has done the most for American investors, the hands-down choice should be Jack Bogle. For decades, Jack has urged investors to invest in ultra-low-cost index funds. In his crusade, he amassed only a tiny percentage of the wealth that has typically flowed to managers who have promised their investors large rewards while delivering them nothing — or, as in our bet, less than nothing — of added value. In his early years, Jack was frequently mocked by the investment management industry. Today, however, he has the satisfaction of knowing that he helped millions of investors realise far better returns on their savings than they otherwise would have earned. He is a hero to them and to me.”