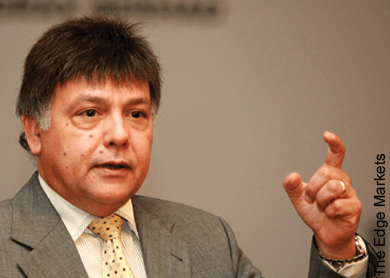 KUALA LUMPUR (March 31): Integrax Bhd's co-founder Amin Halim Rasip has decided to part with his shares in the company, indicating he will be accepting Tenaga Nasional Bhd's (TNB) offer for Integrax at RM3.25 per share.

"Given the different directions pursued by TNB and PCB (Perak Corp Bhd) in respect the future of the LBT (Lekir Bulk Terminal) and LMT (Lumut Maritime Terminal) assets, I will be selling my Integrax shares, as it will be more beneficial and productive for me to pursue the business projects and opportunities I intended to develop at Lumut, at a number of other suitable locations in Malaysia and the region.

"I wish to thank all shareholders and the numerous individuals and staff since 1995 who were instrumental in the success of LBT and LMT, and driven by the purpose and mission to build key catalyst infrastructure for Perak and which has clearly done well and achieved its mission," he said in a statement issued this evening.

TNB's revised takeover offer of RM3.25 per share turned unconditional yesterday (Tuesday March 30), after it received valid acceptances totalling 50.82% or 152.88 million Integrax shares as at 5pm. The utility giant had raised its offer from RM2.75 earlier, but had been unable to win the support of Amin until now. Amin believed Integrax is worth more.