Ombak Damai still has a 7.17% stake in Bumi Armada after the disposal, which was done just ahead of the Sept 10 ex-date of Bumi Armada’s proposed one-for-two rights issue priced at RM1.35 apiece, which was announced on May 23 to raise nearly RM2 billion. Ombak Damai’s disposal followed a placement of 215 million or a 7.33% stake in Bumi Armada by billionaire Ananda Krishnan’s Objektif Bersatu Sdn Bhd on Aug 27, which cut the latter’s stake to 34.92%.

Bumi Armada’s shares, which have been on a downward trend since May, closed at RM1.86 on Sept 24 (Wednesday).

Meanwhile, iDimension Consolidated Bhd saw the cessation of Singapore-based Advance Capital Partners Pte Ltd as a substantial shareholder, after the latter disposed of 49.1 million shares or a 12.4% stake on Sept 17. This was less than a week from the day it emerged as a substantial shareholder with 47.06 million shares, following the conversion of redeemable preference shares. iDimension’s share price has slipped 30.6% in the past three months to close at 12.5 sen on Sept 24, compared with 18 sen on June 9.

Ni Hsin Resources Bhd received an unusual market activity query from Bursa Malaysia on Sept 18, after its share price jumped more than 40% to 47.5 sen in less than one week, from 30-sen levels in early September.

The stock price continued to rise, despite the stainless steel cookware company saying on Sept 19 that it was unaware of any reason for the rise in its share price and trading volume. The company also denied having any knowledge of the deal reported in The Edge Financial Daily on Sept 19, that said Ni Hsin may see a reverse takeover by an oil and gas outfit.

The company pointed out that one of its founders, Hsiao Tsai Sheng, disposed of 23.7 million shares or just over 10.2% equity interest on Sept 18, thus ceasing to be a substantial shareholder. There were no further developments on this, at the time of writing. The stock, which had increased 148.8% since July, closed at 51 sen on Sept 24.

Meanwhile, Daya Materials Bhd’s stock price fell 34% from its all-time high of 45 sen back in February, to close at 29.5 sen on Sept 24. The decline followed its disappointing second-quarter results.

It is worth noting that a filing dated Sept 17 showed its Executive Vice-Chairman and Group CEO Datuk Mazlin Junid disposing of two million shares at 29 sen and 30 sen apiece in the open market, on Sept 10 and 12. That cut his holdings to about 8% — 6.75% of which is a direct stake. 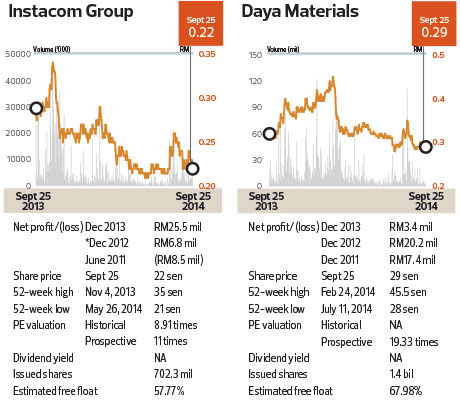 This article first appeared in The Edge Malaysia Weekly, on September 29-October 05, 2014.