Notable filings
Among the notable shareholding changes between Aug 10 and 14 at companies listed on Bursa Malaysia was the cessation of two companies as major shareholders of Ge-Shen Corp Bhd (fundamental: 2.20; valuation: 1.10), which received a takeover offer from Pelita Niagamas Sdn Bhd at 81 sen per share. 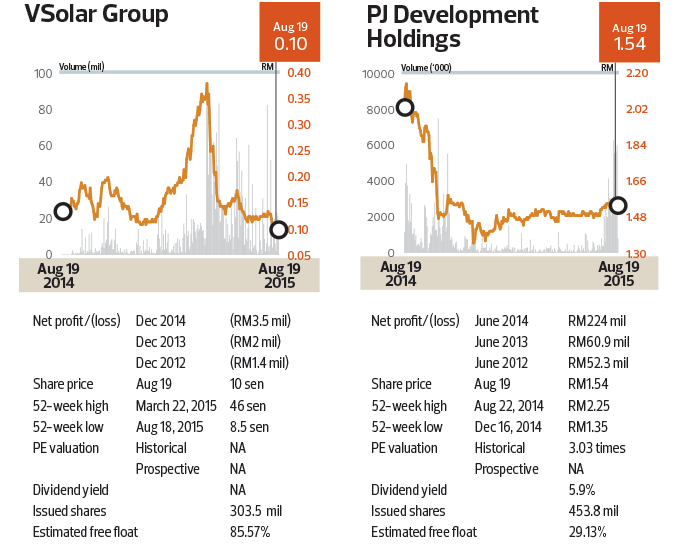 Over at Metronic Global Bhd (fundamental: 1.25; valuation: 0.30), Tekad Mulia Sdn Bhd sold 18 million securities at 8 sen apiece and ceased to be a substantial shareholder. This was just over two months after it emerged as a substantial shareholder with a 5.01% stake in early June, which made the headlines because Tekad Mulia’s director, James Chan Yoke Peng, is understood to be a close associate of businessman Tan Sri Halim Saad.

On the same day, Christopher Chan Hooi Guan resigned as CEO “to devote more time on the operations at the subsidiary level”. Chan, who is a co-founder of TMS (fundamental: 1.85; valuation: 0.90), several days earlier ceased to be TMS’ substantial shareholder after selling his stake in Master Knowledge.

Closing at RM1.54 last Wednesday, shares of PJ Development Holdings Bhd (PJD) were up about 10.55% year to date. On Aug 7, it was picked as a stock with momentum by theedgemarkets.com.

The share price is just 1.28% below the takeover offer of RM1.56 apiece offered by OSK Holdings Bhd, which is controlled by Tan Sri Ong Leong Huat and his wife Puan Sri Khor Chai Moi. The conditional mandatory general offer expires on Sept 1, unless extended. On Aug 18, the couple’s indirect holding in PJD (fundamental: 1.90; valuation: 3) rose to 40.82% after OSK Holdings bought 400,000 shares at RM1.55 apiece on the open market.