Magni-Tech Industries Bhd
MAGNI-Tech, an apparels manufacturer that is a major supplier to global sportswear leader Nike, is an undiscovered, undervalued stock. The stock trades at a low 12-month trailing P/E ratio (excluding cash) of only 5.1 times, with net cash accounting for one-third of its stock price.

Established in 1997, Magni started as a manufacturer of packaging materials before diversifying into apparels with the acquisition of South Island Garment Sdn Bhd (SIG) in 2006. The company has manufacturing facilities in Malaysia and Vietnam.

For FYE April 2014, garments accounted for 81.5% of the company’s total sales with the remaining 18.5% from packaging.

SIG derives most of its sales from Nike, with business relationship dating back to 1985. In 2006, SIG was appointed by Nike as one of its tier-1 woven manufacturers, due to its consistent performance in on-time delivery and high quality apparels. With the appointment, Nike is committed to prioritising the production capacity offered by SIG as well as other tier-1 manufacturers.

The stock is trading at a trailing 12-month P/E ratio of 7.5 times and price-to-book ratio of 1.3 times. Stripping out the cash, the underlying P/E ratio is only 5.1 times. Dividend yield is attractive at 4.4%, and the company can afford to pay out much more given its large cash pile. The stock is presently under the radar of investors with coverage by only one local research house. 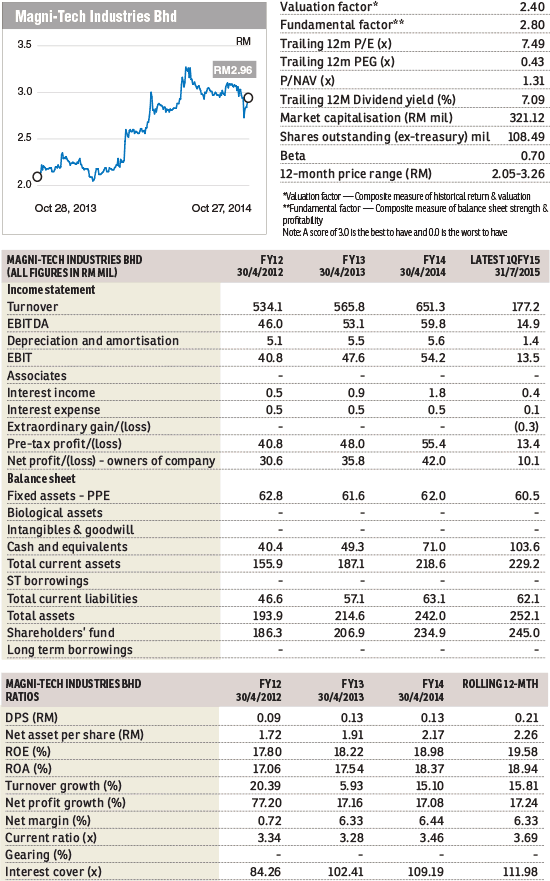