IPOH-based Wellcall manufactures industrial rubber hoses used across a broad swath of the economy — for air and water, welding and gas, oil and fuel, automobile, shipbuilding as well as food & beverage sectors.

Earnings grew steadily for the past four years. In FY Sept 2013, Wellcall saw lower revenue — as customers held back purchases in anticipation of lower prices — but still managed to grow profits, thanks to lower rubber costs. In the latest FY14, both sales and net profit rose — by 11.3% to RM146.4 million and 19.1% to RM29.4 million, respectively. Net margin increased from 11% in FY11 to over 20% in FY14.

The current regime of low commodity prices and weak ringgit bodes well for Wellcall. Almost 91% of the company’s sales are exported, to all over the world.

The ringgit is expected to stay weak, now at the lowest level against the US dollar since mid-2009.

Meanwhile, bulk latex prices have fallen from 536 sen/kg at end-2013 to as low as 350 sen/kg in December 2014 before recovering slightly, on expectations of lower output due to massive flooding. Nevertheless, competition from synthetic rubber — whose prices are correlated to oil — will keep a lid on the recovery.

The Edge Research rates Wellcall a maximum Fundamental score of 3 and 2.1 out of 3 for Valuation.

The company is sitting on net cash of RM41 million, which together with steady operating cashflow will continue to support a generous dividend payout.

Indeed, annual dividends paid have been on a gradual uptrend. Dividend payout was a high 94% in FY14, well above its minimum 50% payout policy. Shareholders would have earned a net yield of 5.32% based on current share price of RM1.56. 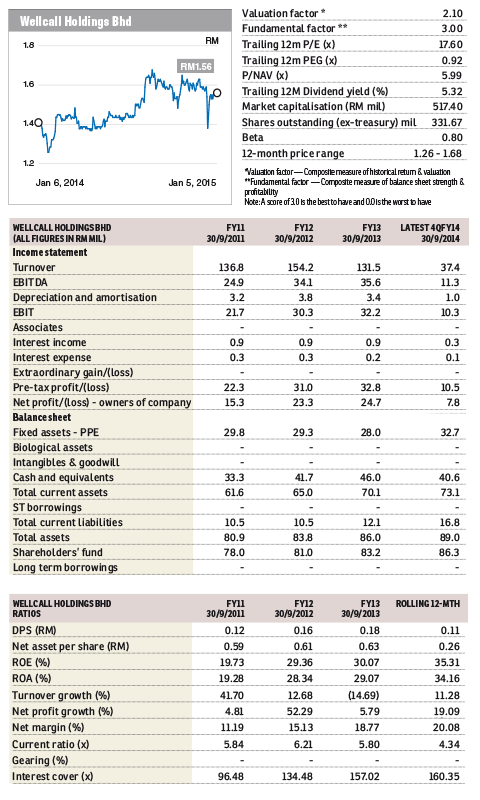