The stock was featured as one of InsiderAsia’s top ten stock picks for 2015. The Edge Research rates it a 2.4 and 2.8 out of 3 for Valuation and Fundamental, respectively.

High dividend yields and a well-established brand presence in Malaysia are definite plus points. The company, which has rode through multiple financial crises in the past, should be well able to weather what is expected to be a very challenging 2015. It is sitting on net cash totalling RM536 million.

Panamy has, historically, rewarded its shareholders well through special, interim and final dividends with payout ratios ranging from 80% to over 100%. Total dividends of 69.2 sen per share for FYMar2014, however, were considerably lower compared to the RM1.41 for FY13. Even so, this still translates to a yield of 3.59% based on the current share price of RM19.26.

One possible reason for the lower dividend could be the yen, which has slumped to seven-year lows on Prime Minister Shinzo Abe’s policies to halt deflation and kick-start the economy. Over the last year, the yen has slumped from 3.14 to 2.99 versus the ringgit. It will be more advantageous for Panamy to repatriate dividends

when the yen is weaker. If so, we could see higher dividends in the near future, once the Japanese currency is seen to have stabilised. 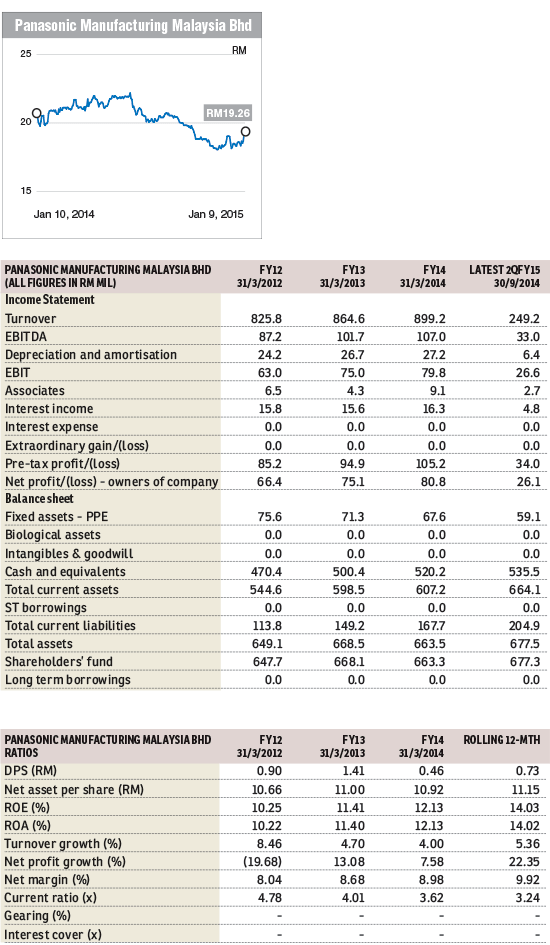