GEORGE Kent (GKent) (Fundamental: 2.1/3, Valuation: 2.4/3) is an engineering company involved in, primarily, the water and construction industries. It is also a leading player in the supply of control instrumentation, telemetry, valves and fittings as well as industrial and domestic water meters. For FY January 2014, construction accounted for 74% of sales, followed by manufacturing and trading (23%), and infrastructure investment (3%).

GKent is well-connected as evidenced by its project wins, which include the RM317.6 million Package 3A of the Pahang-Selangor inter-state raw water transfer project (in a joint venture with Loh & Loh and Hazama), the RM102.7 million contract to supply pumping equipment instrumentation and valves for the Sungei Selangor Water Project, and the RM97.75 million contract from Malaysia’s Ministry of Health to design, build, complete, commission and maintain upgrading works for the Kuala Lipis Hospital in Pahang. It recently won a RM57 million contract to design and build Phase II of the Kuala Lipis Hospital.

Its share price rose as high as RM2.04 in August, before falling back in line with the broader market selloff. It is now trading at a trailing 12-month P/E of 9.9 times and P/BV of 1.36 times. Dividends totalled 7 sen per share in FY2014, translating into an above average yield of 4.9%. 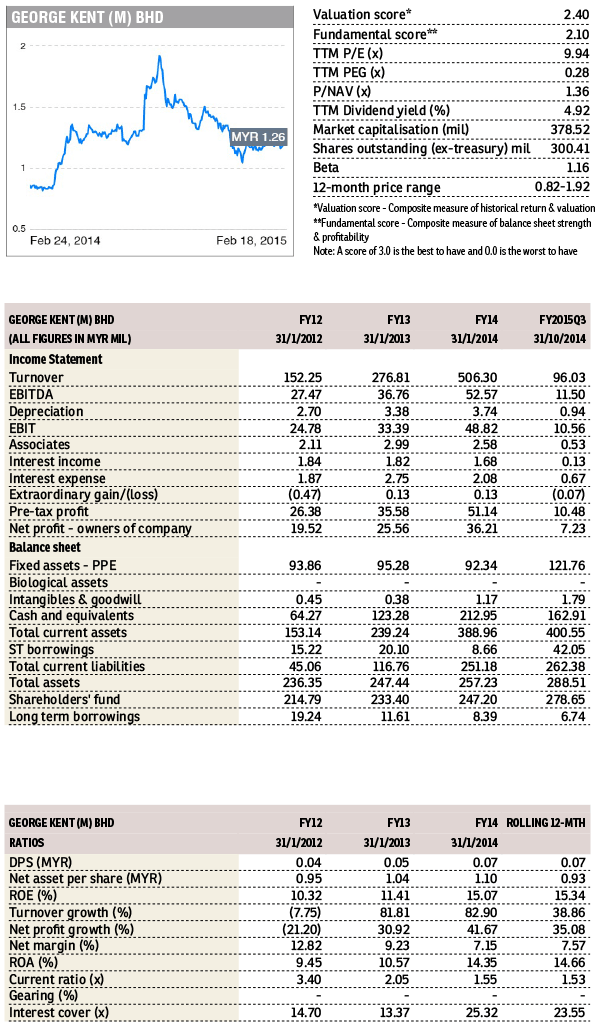