COMPANIES operating in the alcohol, tobacco and gaming industries, often termed as “sin stocks”, tend to derive resilient, recession-proof income with attractive dividends. As the economy turns decidedly more uncertain, investors should re-look some of these sectors for their defensive qualities.

One such stock is Carlsberg Brewery Malaysia Bhd (Fundamental: 2.3/3, Valuation: 2.1/3), which manufactures and imports beer, stout, shandy, and non- alcoholic beverages for distribution in Malaysia and Singapore. Its key brands include Carlsberg, Asahi, Kronenbourg, SKOL, Jolly Shandy and Somersby.

Despite challenges posed by consumer spending uncertainties and periodic higher alcohol taxes (taxes were raised most recently in 2005 and 2010), Carlsberg continues to provide steadily growing sales and profits, with stable profit margins. Part of this is due to its strong brands, introduction of new products and focus on improving operating efficiency and reducing costs.

For the past ten years, Carlsberg has paid an average annual dividend of 45.2 sen per share, which translates into an average yield of 3.6%. In 2013, dividends totaled 61 sen, translating to a high yield of 4.8%. Except for two years in that period, annual payout ratio has exceeded 100%, and yet its net gearing ratio remains very negligible at 2.7% in 3Q2014. 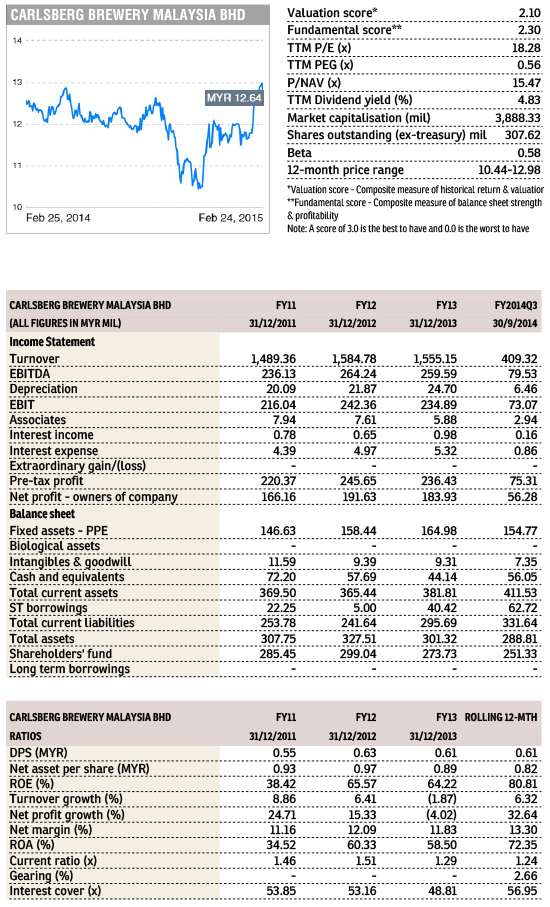