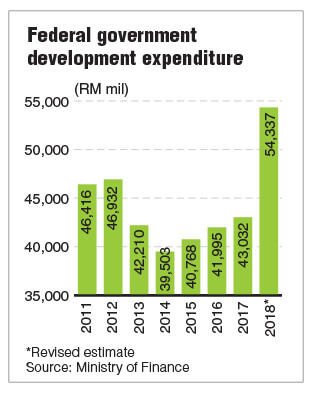 KUALA LUMPUR: With Malaysia’s economic growth seen to moderate going into 2019, coupled with talks of a potential global recession, pump-priming could be one of the ways to support economic growth.

Economists contacted by The Edge Financial Daily believe that increasing spending on infrastructure projects could provide a buffer to any slowdown in economic growth or potential recession.

AmBank group chief economist and head of research Dr Anthony Dass said there could be a potential need for pump-priming through the construction of economically feasible and viable infrastructure projects.

While pump-priming can be a desirable measure in the short run, he nonetheless noted that it can become less feasible in the long run, as it will encourage greater dependence of the private sector on government contracts and can become an “addiction” which could slow down the efforts to promote the private sector.

Despite the construction sector contributing only some 5% to the domestic economy, economists also see the infrastructure projects presenting a multiplier effect to the economy.

“Although the contribution from the construction sector is only around 5% of the overall economic activities, it still plays an important role in supporting the economy through forward and backward linkages with other sectors and business activities,” said Dass.

He noted that for every additional ringgit, the construction sector creates an additional value of 35 sen. This would mean that an additional RM30 billion spent would raise the potentially value-add from this sector by RM10.5 billion.

Dass, however, pointed out that this additional value-add will not be immediately apparent.

Sunway University Business School economics professor Dr Yeah Kim Leng said the multiplier effect from infrastructure projects will be a “substantial” 1.8 times to the gross output of other industries or the overall economy, with every unit of ringgit spent on the construction work.

Yeah said these infrastructure projects, being sizeable, could spur and have a spillover effect on other activities including the opening up of a new industrial and commercial sector along the corridor.

“I believe that the immediate spillover will be that those townships that are located along the corridor. They will benefit from increased activities especially during the construction stage whereby there will be greater demand for supply, provisions as well as other supporting services needed,” he said.

This will then lift sentiment, given that any spending and injection of money into the economic system during any economic slowdown is like a stimulus, said Yeah.

He added that any spending will present greater utilisation of the Malaysian workforce and domestic inputs.

For the longer term, Yeah believes that it will spur new economic activities along the corridor. With more infrastructure projects, the localised impact will be greater in terms of job creation, business opportunities and injection of income into the local economy.

Additionally, while the extent of the slowdown in economic growth is still uncertain moving forward, Yeah opined that any support given to any of these sectors will help avert any potential recession.

“At this juncture, whatever policies and strategies that can boost investors’ confidence as well as consumer sentiment will be very helpful,” he said.

Yeah explained that any effort taken to resolve a policy uncertainty will be equally beneficial in terms of ensuring that the uncertainty and sentiment will not exacerbate the negative perception on the economic prospects.

More importantly, Yeah said this clarity in policies will be welcomed by the business communities as some of the businesses have been holding back due to the uncertainties in the local and external markets.

MIDF head of research Mohd Redza Abdul Rahman concurred, saying that infrastructure projects will lessen the impact of any economic slowdown because these projects would provide jobs from suppliers of raw materials and equipment, construction work and others.

“In fact, pump-priming helped stimulate the economy back during the Asian Financial Crisis in 1998,” said Mohd Redza.

Apart from having the job creation during the commencement of the infrastructure project, Mohd Redza also noted that the spillover effect could be seen even after the completion of the project.

This would also create opportunities of residential and commercial developments along the infrastructure project, he said, adding that this will then increase connectivity to hard-to-reach areas.

This will then enable manufacturing plants to be spread further out from the cities, relieving expensive land for other developmental uses, and also allow greater access to human capital, said Mohd Redza.

Meanwhile, with the potential reinstatement of the East Coast Rail Link (ECRL), Yeah said it will not only lift sentiment but also invigorate Chinese capital investment in Malaysia.

“There has been a holdback [in Chinese investment] because of the major government-to-government issues related to the ECRL,” he said.

He added that a revival of the ECRL will also lead to higher inflow of Chinese investment in other sectors of the economy, including tourism.

“The economic ties between the two nations will be strengthened and this will be an important signal to investors as well as to people of both countries,” said Yeah.