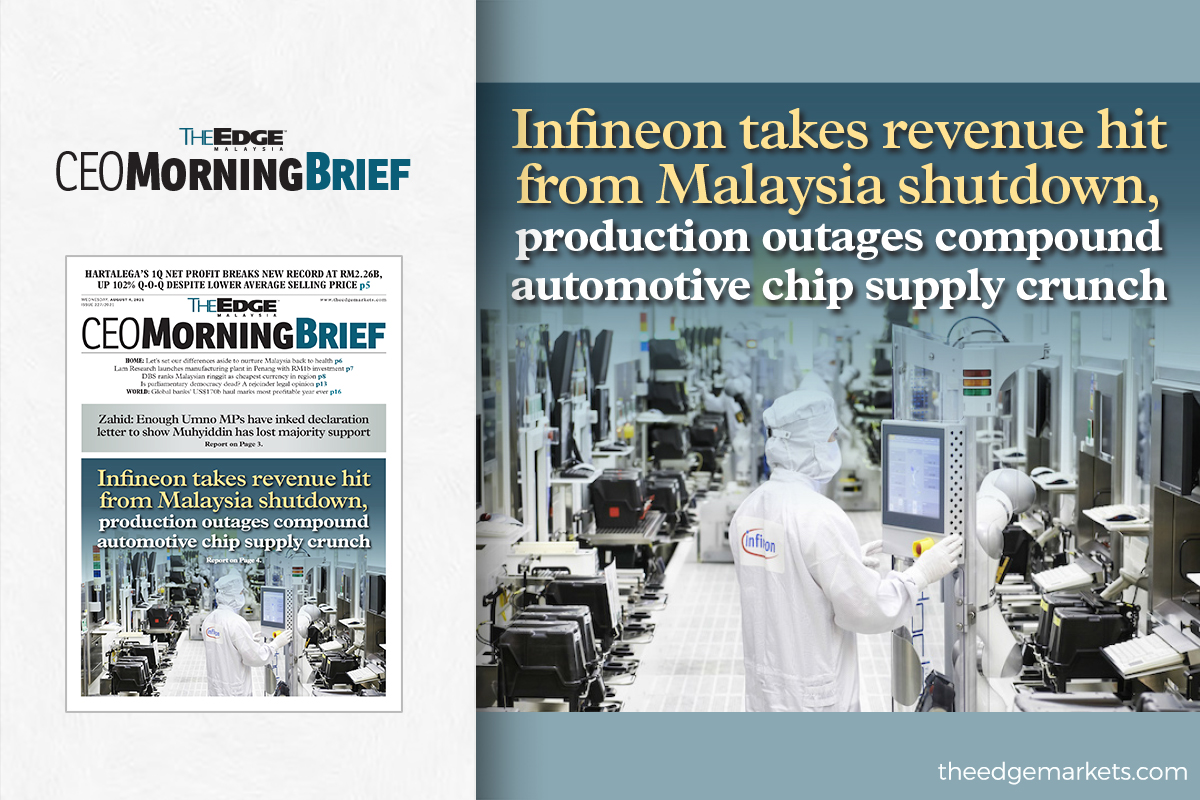 “With the Melaka plant only expected to return to producing at full capacity this month, Infineon faces a hit in the double-digit millions of euros (dollars) that will run into its fiscal fourth quarter to Sept 30.” — Reinhard Ploss, Infineon chief executive

BERLIN (Aug 3): Chipmaker Infineon Technologies said on Tuesday that production outages at two of its plants had hit deliveries to core automotive clients, as the German car industry battles the worst supply crunch in three decades.

Just as Munich-based Infineon was recovering from a winter storm that crippled its plant in Austin, Texas, a new wave of coronavirus infections forced the shutdown of one of its plants in Malaysia in June.

The production outages mean that, compared to European rival STMicroelectronics, Infineon was less able in its fiscal third quarter to profit from strong demand for everything from smartphones to automobiles.

The German car industry, the export powerhouse of Europe's largest economy, is also struggling: BMW warned on Tuesday that chip shortages would dent its results later this year, after a strong first half.

Commenting on the automotive industry, which accounts for two-fifths of sales at Infineon, Infineon chief executive Reinhard Ploss said recovery was being held back by "acute supply limitations across the entire value chain".

"Inventories are extremely tight and end demand is being postponed. All in all, it will take time to get back to a supply-demand equilibrium. In our view, this will take until well into 2022," Ploss told analysts on a conference call.

Infineon shares narrowed sharp early losses to trade 1.4% down at mid-morning in Frankfurt.

Ploss said inventories were "at a historic low; our chips are being shipped from our fabs straight into end applications".

Under those circumstances, any government-imposed lockdowns — such as the one at Melaka in Malaysia where Infineon has a production site — were especially grave.

With the Melaka plant only expected to return to producing at full capacity this month, Infineon faces a hit in the double-digit millions of euros (dollars) that will run into its fiscal fourth quarter to Sept 30, he said.

Confirming the grim picture, the Ifo economic research group said on Tuesday that the German car industry and its suppliers faced the worst chip supply shortage in 30 years. A poll showed that 83% of companies were affected, up from 65% in April.

"This is leading to production stoppages," said Ifo's Oliver Falck. "The shortages of semiconductors will persist for some time to come."

Infineon will be able to raise output of specialist power-management chips with the commissioning of its new plant in Villach, Austria, but it still relies heavily on Asian contract manufacturers that are running flat out.

Infineon's revenue grew by 1% to 2.72 billion euros (US$3.23 billion) in the fiscal third quarter from the prior three-month period, shy of expectations in a poll of 22 analysts by Vara Research.

And, although year-on-year revenue growth was 25%, that was below the 43% reported by STMicro, which last week raised its outlook on high demand and improved pricing power.

Infineon maintained its forecast for revenue in its fiscal year to Sept 30 of 11 billion euros, while nudging up its guidance for segment result margin — a measure of operational profitability — to above 18%.