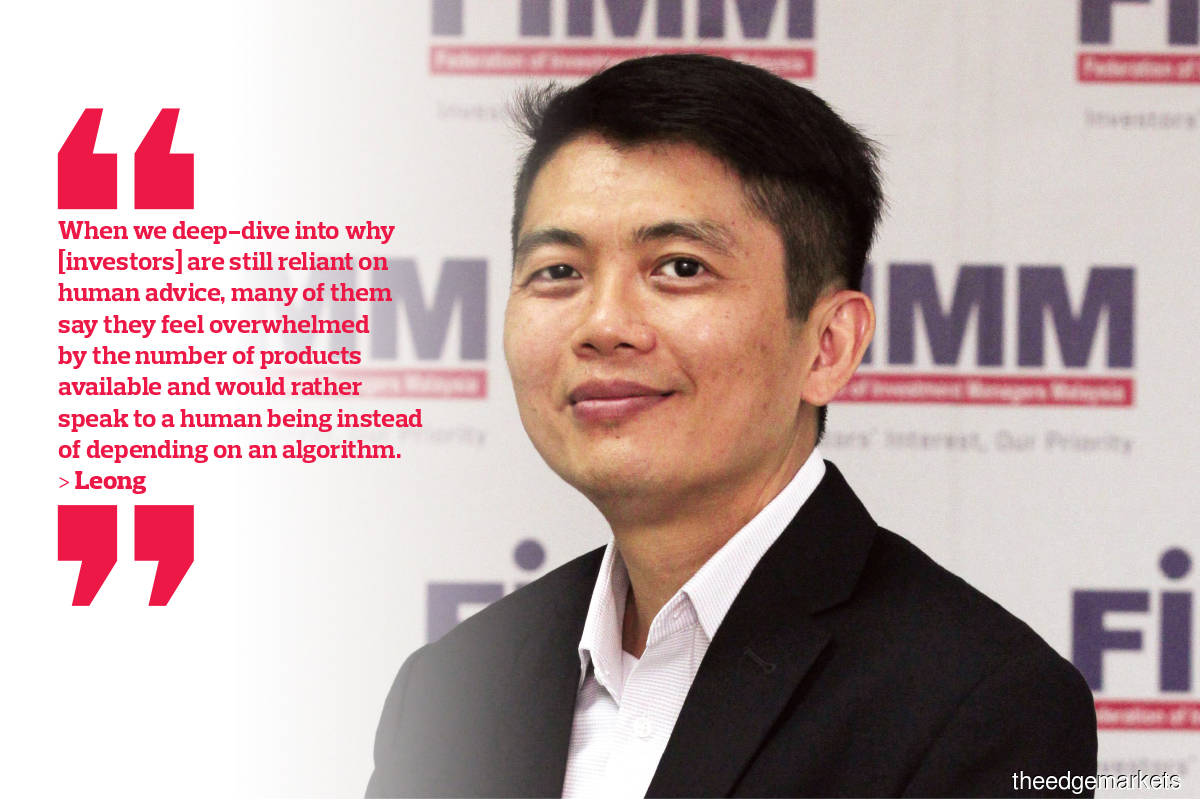 In Malaysia, the advent and development of fintech has led to a growing number of investors turning to digital means to invest their funds. Despite this, the majority of local investors still prefer interacting with a human being in guiding their investment decisions, according to the Federation of Investment Managers Malaysia (FIMM) CEO Kaleon Leong Rahan.

Citing FIMM’s Nationwide Survey 2019 report, released on Aug 5, Leong says advice given by consultants is seen to be crucial in helping investors and non-investors alike decide on their investments. “While investors today are more tech-savvy, over half of the respondents say they still want some sort of human interaction when making their investment decisions. This was true 10 years ago and is still true today.

“When we deep-dive into why they are still reliant on human advice, many of them say they feel overwhelmed by the number of products available and would rather speak to a human being instead of depending on an algorithm. After all, being tech-savvy does not equate to being financially literate,” says Leong.

Even so, Leong notes that unit trust scheme (UTS) and private retirement scheme (PRS) consultants have adopted technology in their day-to-day business, including using different ways of communicating with investors.

“Our member companies, which consist of unit trust management companies (UTMCs), had also taken the opportunity during the Movement Control Order (MCO) period to accelerate any digital enhancements that they needed to do.

“Prior to the MCO, many thought that digital transformation was something that would take a long time to implement. However, in the new normal, people are beginning to realise that they have to adapt and change. Our member companies knew that they needed to up their game. Today, we can see that a lot of them are making themselves easily accessible to investors online,” he says.

The industry has also seen the entry of digital investment management platforms, which allow investors to make investments without any human interaction.

Leong welcomes the new technology and says that providing investors with new ways to invest is beneficial for the industry as a whole. He stresses, however, that investors using the platforms need to clearly understand what they are investing in and the risks involved.

According to the nationwide survey, the majority of respondents use fintech for banking transactions, followed by activities related to UTS and PRS, other investments, insurance and foreign exchange. When asked about their activities in connection with UTS and PRS, investors say they use the fintech platforms to monitor their unit holdings, investment performance as well as pricing. This was followed by performing buy-and-sell transactions, reading fund fact sheets and related documents, investing without consultants’ advice (do-it-yourself investing) and accessing the online chat function to enquire about investments.

“It is good to know that investors are using fintech for these purposes. We would like to give credit to the Employees Provident Fund for the Electronic Members Investment Scheme (e-MIS), which makes it easier for investors to withdraw their savings and perform transactions in UTS products,” says Leong.

Addressing challenges in the industry

The nationwide survey was held a decade after a similar survey was first commissioned by FIMM in 2008. Leong says in the last decade, the industry had seen many changes, such as those in the economy and socio-demography, as well as the introduction of various investment products, including the PRS in 2012.

Unlike the 2008 survey, which was confined to the Klang Valley and had a base of 1,000 respondents, the 2019 survey had a wider coverage in terms of the number of respondents (3,317), geography (13 states and two federal territories) and demography, says Leong.

“At the time, there were 532 UTS offered and most of them were predominantly invested in the local markets. Today, we have 685 products available. We also did the survey to get an idea of the investment pulse in Malaysia, because the UTS industry’s compound annual growth rate (CAGR) in terms of net asset value is on a decline.

“From the time FIMM was established in 1993 until today, the CAGR is 11.6%. If we narrow it down to the last 10 years, the CAGR is 9.7%. In the last five years, it has gone down to 7.2%. We are cognisant of the fact that although the UTS industry is growing, the percentage of growth is gradually declining. Something needs to be done. Hence, we embarked on the survey to understand the evolving needs of investors and the industry,” says Leong.

In contrast to the 2008 survey results, the 2019 survey results showed that the primary goal of most individuals in saving and investing has changed, says Leong. Instead of saving for their children and dependents, they are just meeting basic daily needs. The higher cost of living has eroded most people’s ability to save and their capacity to invest.

One aspect that has not changed much since 2008 is UTS investors’ risk aversion. The 2019 survey showed that investors continue to prefer low-risk investments that offer capital preservation. The low-risk tolerance is also reflected in their preferred investment and savings vehicles (excluding UTS and PRS): Investors ranked their top three choices as savings/fixed deposits, life insurance and property — all of which are generally characterised as stable and conservative options.

While there are now more choices for investors, educating them on these products remains an ongoing challenge, says Leong. “Financial literacy is still not at the desired level. But while limited knowledge is dangerous, information overload is equally harmful.

“There are a variety of investment products besides UTS and PRS, so it is crucial to ensure that investors are provided with clear and comparable information regarding their investments and the risks involved.”

In general, the UTS investors surveyed tended to have a long-term investment horizon — 59% of them had held their current investments for at least four years, 34% for one to three years, while the remaining 7% had held theirs for less than a year.

On the possible trigger events that could influence the investors’ decision, the survey found that investment returns dominated the responses — 42% indicated that they would sell their investments when the unit price increased above their cost. Other reasons included retirement (29%) and funding a major purchase (25%). About 29% of the respondents said they had no intention to redeem their investments in the future.

In terms of investment channels, the report found that conventional methods such as visiting a bank, an agency or a UTS and PRS company remained the top choices for investors. This corresponds with Securities Commission Malaysia’s (SC) data on gross sales as at December 2019, which showed that the top three distribution channels that contributed to high UTS sales were UTMCs, institutional UTS advisers and UTS consultants.

The survey also found that 76% of UTS investors were satisfied with their investments, citing reasons such as management and stability of UTMCs and services rendered by the consultants. The remaining 24% were dissatisfied; they were mainly unhappy with the fees and charges imposed possibly because of poor returns and the advice given by the consultants.

“We acknowledge that almost a quarter of the respondents were not satisfied with their investments for reasons such as fees, mismatch of expectations vis-à-vis their investment performance and poor service levels provided by the consultants. We do have plans to address these challenges.

“For instance, our future plans include upgrading and upskilling the consultants via e-learning portals, developing tools that will assist them when providing advice on goal-based investments and conducting in-depth research on UTS and PRS fees and sales charges,” says Leong.

Established in 1993, FIMM was initially known as the Federation of Malaysian Unit Trust Managers, with a mandate to represent the UTS industry and promote its growth. By a gazette order dated Jan 20 2011, FIMM was recognised by the SC as a self-regulatory organisation (SRO).

“FIMM’s role before it became an SRO was quite limited. Nevertheless, we did play a role in contributing towards the industry’s development. From 1993 to 2009, the liberalisation of distribution channels and regulations as well as an influx of new entrants and products took place. “When the SC came up with the Capital Markets Masterplan 1, one of the recommendations was to have an SRO for the investment management industry. FIMM was accorded that responsibility,” says Leong.

He adds that FIMM’s role leans more towards ensuring that the consultants are fit and proper and ethically driven. This means that the firm takes complaints that it receives from all its channels very seriously.

Leong notes that FIMM does not receive a large number of complaints. For the five years from 2016 to June 2020, FIMM received a total of 214 complaints — for context, it currently oversees more than 60,000 consultants. The top complaints are for misappropriation of money, accepting cash in personal accounts, misrepresentation and unauthorised transactions. Other offences include pre-signed or pre-thumbprinted investment forms, providing a forecast or guarantee of a specific result, forging of signature and dealing with unapproved or unauthorised funds.

“I checked with my team whether there were any complaints related to fraud or misrepresentation that happened during the MCO. Currently, there is none. This year, we only received complaints for events that took place pre-MCO,” says Leong.

He adds that beginning from last year, FIMM had intensified its supervision approach by complementing the enforcement efforts taken by its member companies with regard to their consultants. If it feels that a stronger reprimand is needed, FIMM reserves the right to take a harsher stance, says Leong.

“Another thing I would like to highlight is that we actually spend a lot of time dissecting complaints and investigating whether there is any truth to the claims, even the anonymous ones. That is the level of scrutiny we apply. We also welcome complaints — we make it very easy for people to reach us.

“We are very serious in ensuring that only ethical, fit and proper consultants are out there. Currently, we are intensifying our efforts through various channels to make sure that people are aware of us. We want to encourage them to reach out. We are happy to know that our member companies are also ensuring this — in fact, some of the complaints we receive were referred to us by them,” says Leong.

FIMM is looking at a more holistic approach to address all of the challenges it has identified, such as better investor education. Part of FIMM’s mandate as an SRO is to educate investors and promote public awareness of the benefits of investing in UTS and PRS.

This mandate is also in line with the Financial Education Network’s five priorities, under its National Strategy for Financial Literacy 2019-2023, which was launched in July 2019. In supporting these efforts, FIMM regularly participates in investor education exhibitions and roadshows across the country and collaborates with its partners in an effort to reach a wider audience. (The Financial Education Network is an inter-agency grouping co-chaired by Bank Negara Malaysia and SC whose founding members are the Ministry of Education, Perbadanan Insurans Deposit Malaysia, Employees Provident Fund, Agensi Kaunseling dan Pengurusan Kredit and Permodalan Nasional Bhd.)

Moving forward, Leong says he is optimistic about the growth of the local UTS industry in the new normal. “If we look at the overall statistics for the UTS industry, before the MCO, the industry net asset value was RM471 billion. As at July, it had gone up to RM491 billion. Meanwhile, in terms of unitholders, we have seen about 150,000 new accounts since pre-MCO.

“This gives me hope that the industry’s mechanism is quite resilient. Obviously, with more than 600 funds in the market, there are funds that are performing very well and there are others that are yet to perform. But the fact is that there are very strenuous evaluation exercises to ensure that the performance of the funds is thoroughly scrutinised.

“At FIMM, we acknowledge that there is still work to be done at our end. We are doing our best to ensure that we protect investors and develop the industry together with other stakeholders,” says Leong.