Indonesia’s fires are our problem 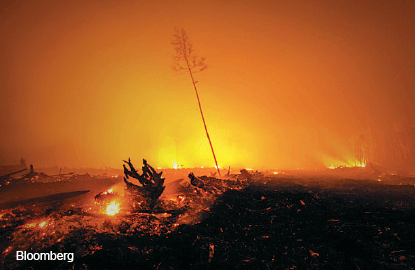 This article first appeared in The Edge Financial Daily, on November 6, 2015.

THE timing is accidental but impeccable. Just as governments are about to launch an unprecedented effort to curb global greenhouse-gas emissions, one of the biggest carbon-dioxide gushers ever known has erupted with record force.

At times during the past several weeks, fires in Indonesia have released as much carbon as the entire US economy, even as they have destroyed millions of acres of tropical forest, a natural carbon sink. Neighbouring countries, along with economic giants such as the US, China and Europe, have to join forces to turn off this tap.

Indonesia, which contains the third most tropical rainforest on earth, has long suffered from devastating rates of deforestation, losing more than 15 million acres (6.07 million ha) from 2000 to 2012.

After a brief decline, fires have flared during this year’s dry season, fed by an El Nino weather pattern, as companies and small cultivators burn to clear land on Sumatra and Borneo. The blazes have charred more than four million acres of forest and farmland and spread a choking haze as far as the Philippines and Thailand.

Halting such fires — which have been an annual occurrence for more than two decades, although rarely on this scale — is not easy. While the Indonesian government has renewed a moratorium on clearing forests and peatlands, local officials continue to profit from looking the other way.

Such enforcement problems can be overcome, however, as Brazil demonstrated when it reduced deforestation by 76% from 2004 to 2012. The world has good reason to help Indonesia do the same: Preserving the country’s forests and peatlands could lower global carbon emissions by half a gigaton annually by 2030.

Money is not the main need. In 2011, Norway set up a US$1 billion (RM4.29 billion) fund to reward Indonesia’s efforts to save its forests. Yet only US$50 million has been disbursed so far, because the Indonesian government has not made enough progress against deforestation to unlock the money.

The US and other countries could provide technology to monitor forests more precisely, so that culprits cannot so easily escape scrutiny. More important in the long run, aid and technical assistance could help small-scale farmers raise their yields, making it unnecessary for them to clear-cut more land. After all, the pressure to burn will last only as long as it makes economic sense.

To that end, the Netherlands has banned imports of palm oil that are not certified as sustainable, and there is hope that by 2020 all of Europe may do the same. Similar pledges from India and China in particular — among the world’s top consumers of palm oil — would have an even bigger effect.

Meanwhile in Singapore, where many of the biggest palm-oil companies are headquartered, banks could be required to impose stricter environmental lending standards, so those companies clean up their supply chains.

Above all, the US, the European Union and China should commit to buying carbon credits from Indonesia if the government reduces emissions from deforestation and forest degradation.

In so doing, regional, national, and, in the case of the US, state-level cap-and-trade programmes would guarantee Indonesia that its good behaviour will be rewarded — and acknowledge that the fires are a problem for the whole planet. — Bloomberg View