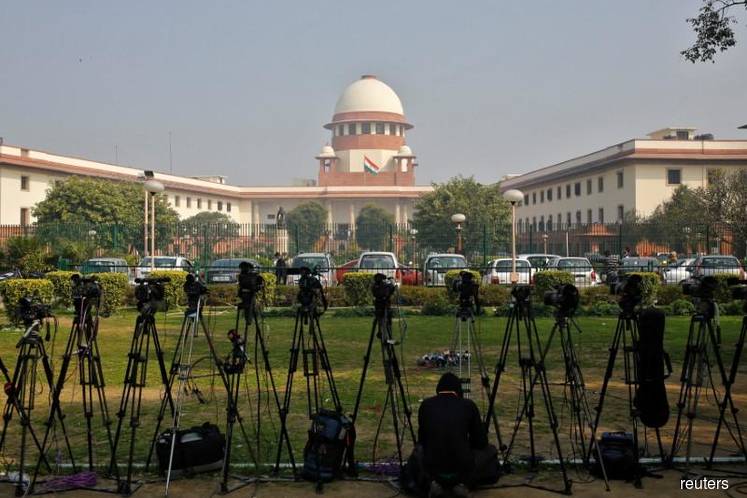 NEW DELHI (Jan 17): Shares of Vodafone Idea fell as much as 40% on Friday, losing US$975 million in market value, after India's top court rejected mobile carriers' petitions for a review of its order to pay billions of dollars in levies to the government.

India's mobile carriers had filed petitions to review an October ruling by the Supreme Court that upheld a long-standing government demand that wireless carriers pay 920 billion rupees (US$13 billion) in overdue levies and interest.

The court's rejection on Thursday of petitions by Vodafone Idea, Bharti Airtel and the now-defunct Tata Teleservices is likely to add to the financial woes of India's telecoms sector, which has been badly bruised by a price war.

It could also threaten the survival of Vodafone Idea, a joint venture between Britain's Vodafone Group Plc and India's Idea Cellular, as the unit is saddled with about US$3.9 billion in overdue payments, the biggest portion of the entire industry levy.

After the October ruling, its parent Vodafone Group had said the situation for its India venture was "critical".

"With Aditya Birla and Vodafone groups unwilling to infuse equity in Vodafone Idea, we see a strong possibility of Vodafone Idea going for bankruptcy," analysts at Credit Suisse said in a note, while suspending their rating and target price on the stock.

"The probability of India transitioning to a two mobile-operator market has increased considerably," it said. It maintained an "Outperform" rating on Bharti Airtel stock.

Shares in Vodafone Idea tumbled as much as 40% to a two-month low on Friday, wiping out nearly US$1 billion in market capitalisation. Shares in Bharti Airtel Ltd, which must pay roughly US$3 billion, however rose 5% on expectations for a possible consolidation that will bring it new subscribers.

The trio of Vodafone Idea, Bharti Airtel and Reliance Jio, which is backed by Asia's richest man, Mukesh Ambani, controls more than 90% of India's mobile market.

Jio has been the only carrier in recent months to add subscribers to its roster. It won't be impacted by the court ruling because as a new entrant, Jio does not have significant dues to the government.

Bharti Airtel and Vodafone Idea said they were evaluating approaching the court a final time seeking relief on the order under the constitutional rights available to companies in India.

"The industry continues to face severe financial stress and the outcome could further erode the viability of the sector as a whole," Bharti said in a statement.