India a bright spot amid the gloom (Part 1) 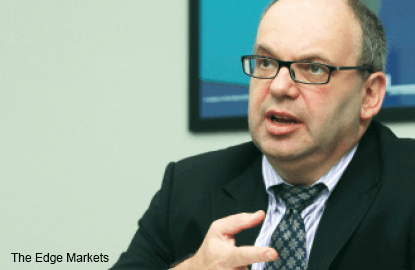 WITH China’s stock market meltdown casting a shadow of doom and gloom on emerging market equities, some investors are looking at other countries in the region such as India.

Leon Goldfeld, for one, is bullish on the Asian nation for its robust economic growth and healthy stock market. Corporate earnings in India, he says, have grown from 15% to 20% in the past 5 to 10 years, and this momentum is expected to continue over the next five years.

“This is faster than anywhere else [in the world]. [Also,] stock market valuations are still not expensive,” he points out. As at Sept 14, the price-earnings ratio (PER) of the MSCI India Index for 2015 stood at 17.8 times. The projected PER for 2016 is 14 times. “These are within the normal historic range for PERs in India. Compared to other emerging markets while at a premium, we think this premium is more than justified.”

Goldfeld, who is deputy chief investment officer for equities (Asia ex-Japan) at Amundi Hong Kong Ltd, has more than 20 years’ experience in investment management, particularly in the area of strategic and tactical asset allocation. He favours domestic companies listed in India as they are expected to benefit from the higher growth in the local economy.

“We think the massive local economy will develop [at a faster rate] than the global economy. Buying into domestic-oriented companies also means buying into the higher growth in India,” he says.

“If we look at the sectors, those that focus on domestic demand, like construction and consumer consumption related companies, are going to benefit. This compares with, say, companies in the technology sector, which are exporting and relying on the global demand.

“Export-oriented companies are unlikely to gain strength from the sluggish global growth at the end of the year. The country’s service sector and retail consumption are actually growing well.”

While equities in other emerging markets may need two to three years to rebound when global growth and commodity prices start to get back on track, stocks in India are expected to provide returns that are similar to those in developed markets. “That is because the valuations of equities [in India] are attractive, given the growth prospects of the country,” Goldfeld says.

In response to what he calls a slow pace of reform, Jim Rogers, renowned investor and chairman of Rogers Holdings and Beeland Interests Inc, is reported to have pulled out his investments from India. In a Sept 2 article, he cited a concern that India has a very high debt-to-GDP ratio which, according to him, will hinder the country’s economic growth.

Nevertheless, Goldfeld remains positive on India. “Investors are getting somewhat frustrated with the pace of policy change, but the focus remains on the medium to long term as the benefits of reform are huge. Thus, even if it takes a bit longer than expected, as long as [the reforms] happen, the market will remain constructive,” he says.

“India has a structural challenge with the level of debt and size of deficits, among other issues that need to be addressed. These problems are well known, and it will not be solved in the short term. But as long as the government is committed to enacting positive change, we expect the market will remain hopeful.

“If the government agenda changes and it gives up on the reform path, then the outlook for India could worsen substantially. For now, there are no signs of this occurring.”

Goldfeld also favours developed market equities, such as those in Europe and Japan, owing to their ongoing quantitative easing (QE) programmes. “We are more bullish on developed markets such as Europe.

Growth is improving a little because QE is a very important support factor. Markets are not expensive as well. We especially like banks in Europe because their [valuations] are cheap.”

On the global stage, Goldfeld favours sectors that are less affected by cyclical growth, such as healthcare and consumer goods companies. He is also bullish on global banks.

“Besides being cheap, [the banking sector] will also benefit from a higher US interest rate. A gradually improving global economy will reduce their bad debt,” he says, adding that he avoids cyclical stocks such as the basic materials and heavy industries sectors.

Across all asset classes, Goldfeld favours equities because they are the main thing investors to look to when bond yields are low and global economic growth is sluggish.

“However, the key for investors is to be cautious and not to expect too high of a return. It’s just unlikely to happen. In general, the market is not negative. But from an absolute return perspective, it is not going to be spectacular,” he says, adding that equity returns over the next few years are likely to average between 4% and 8%, while fixed-income returns will be below 3%.

As returns are hard to come by with traditional assets, many experts have advised investors to shift a portion of their fixed-income allocation to alternative investments such as hedge funds and properties.

Goldfeld opines that while there are opportunities to get higher returns in alternative investments during volatile environments, there is quite a lot of risk that is usually underplayed.

“Investments such as properties are not liquid, and more often than not, prices don’t reflect true market prices as there are no daily or weekly transparent valuations. Stocks and bonds are priced in a way that you know how much you are going to sell tomorrow.

“But alternative investments are often priced based on some pricing model calculation and don’t necessarily reflect the true price on the secondary market. It is not necessarily as good as it seems. If you pick the wrong one, you will lose all your money.”