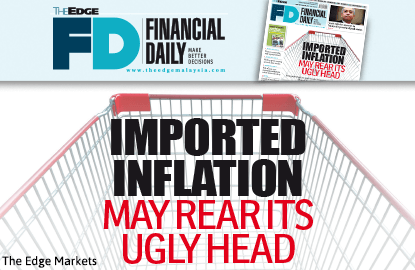 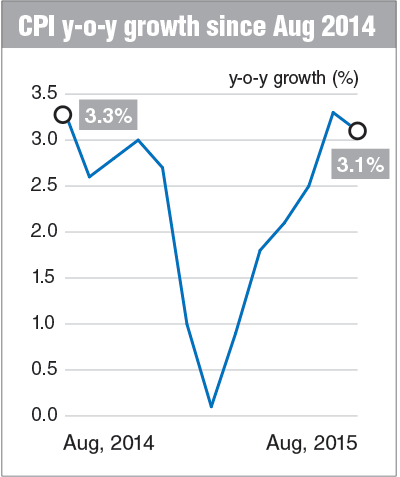 KUALA LUMPUR: The low fuel prices have helped contain the inflationary pressure exerted by the implementation of the goods and services tax. However, moving forward, the weak ringgit could be one that causes inflation to rear its ugly head.

The latest economic data show that the country’s inflation, measured by the consumer price index (CPI), went up by 3.1% in August — it came in at the higher range of analysts’ expectations. The rate was indeed lower compared with 3.3% in July.

The inflation was mainly driven by the rise in prices of liquor and tobacco products, coupled with more expensive healthcare services and higher restaurant and hotel charges.

For the first eight months of 2015, the CPI rose 1.9% year-on-year, and was unchanged on a month-on-month basis. The pace of 1.9% from January to August does not seem to point to any inflationary pressure.

Nonetheless, some economists foresee the possibility of rising inflation given the more expensive imported goods; be they food, medicine, manufacturing inputs or auto parts, as a result of the sharp depreciation of the ringgit against other currencies, including the Thai baht and the Philippine peso, and not only the US dollar.

While forecasting a lower full-year inflation of 2.5% this year versus 3.2% in 2014, AllianceDBS Research acknowledged that the soft local currency could possibly result in imported inflation.

“In light of the ringgit exchange rate trend (trading above RM4 per US dollar since early August) that could remain weak for a while before the various external and domestic macro uncertainties settle, the risk and impact of imported inflation are near-term concerns,” it said in a research note.

AllianceDBS noted that the historic annual trends, for the period from 1980 to 2012, between the Malaysian import price index and the CPI have a high positive correlation of 0.97, which means overall price pressures move in tandem in the long run.

The import price index’s below-trend of 0.2% growth for the year to July was due to the slump in global crude oil prices. Even after excluding the mineral fuel imports’ price pressure effect, it said the index was still marginally lower than the CPI trend, at 1.6%.

“Given the complex exchange rate cost pass-through to the CPI, we expect imported inflation pressure to gradually catch up in the coming months.

The less robust consumer spending may put a cap on any price increases on imported goods.

“Imported inflation was less evident in August versus July,” said Citi Research. According to it, only two of the categories that saw an inflation pickup in August had sizable import content, compared with five categories in July.

Nonetheless, the research outfit noted Bank Negara Malaysia’s earlier estimate of a muted inflation pass-through from a stronger ringgit, with a 10% appreciation of the local currency reducing inflation by just 0.05% to 0.15%. But it might be a different pattern in the case of the weakening ringgit.

“The main determinant of this would be the domestic fuel prices, which were cut by 10 sen across all fuel types. The lower fuel prices will exert some downward pressure on inflation,” he said.

Sia noted that fuel prices were further reduced in September which could result in lower y-o-y inflation for the month.

“We view that global oil prices will remain low in the near term. In view of the low oil prices, we are lowering our 2015 inflation target to 2% from 2.5%, and expect the CPI to grow 2.6% in September,” he said.

Asked if the weakened ringgit will pressure inflation upwards, Sia said the ringgit seems to be stabilising, which means imported inflation will not be as strong.

“The lower fuel factor will probably offset the inflationary pressure from the weakened ringgit,” he said.