The importance of good rapport 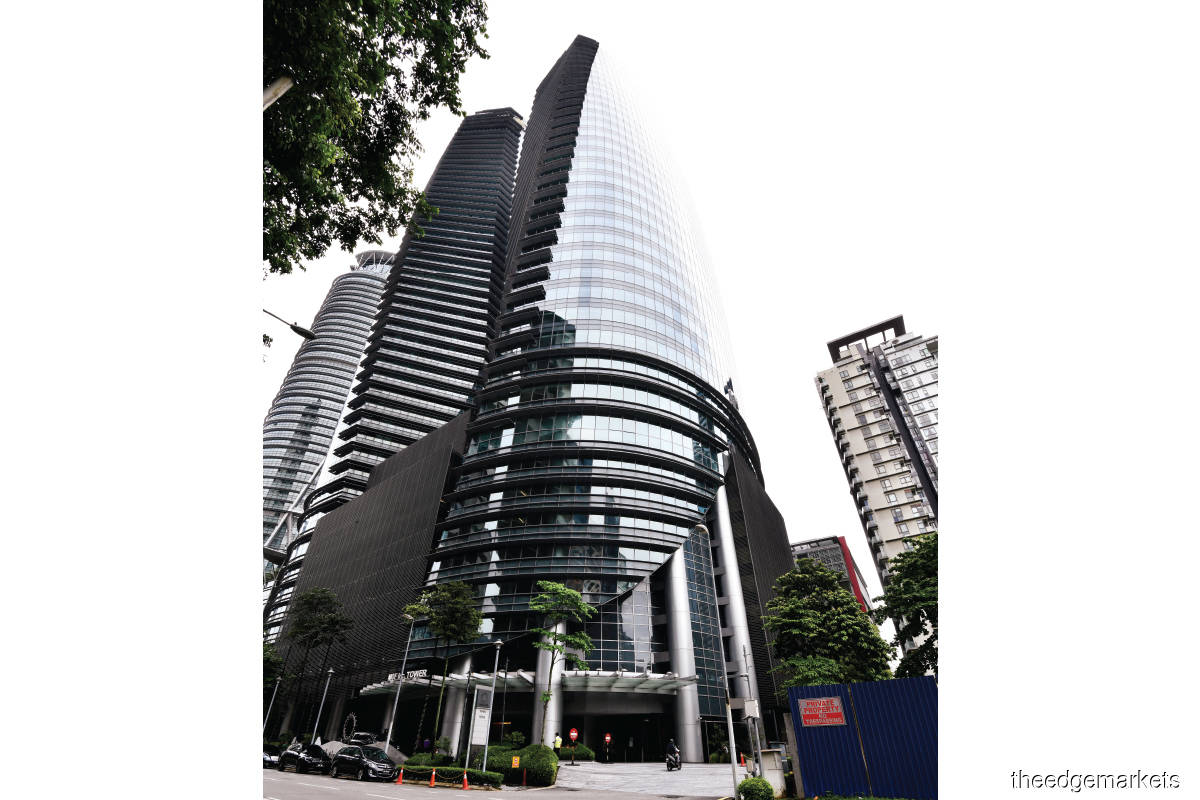 As one of the three Grade A office towers of the stylish Platinum Park mixed-use development along Persiaran KLCC in downtown KL, the 38-storey MOF Inc Tower has gone through three name changes.

Completed in 2015, the building was first known as Menara TH Platinum back when it was owned by Lembaga Tabung Haji, before Urusharta Jamaah Sdn Bhd (UJSB) took over the property in January 2020 and named it Platinum East Tower.

As UJSB is a wholly-owned subsidiary of MOF Inc, the new owner decided to rename the property MOF Inc Tower. As the saying goes, third time’s the charm.

MOF Inc Tower bagged the Silver award under the Below 10 Years Single-owned Office in a Mixed Strata category.

Developed by Naza-TTDI Sdn Bhd, the commercial office tower, which occupies a land area of 7,575 sq m and has a total net lettable area of 351,249 sq ft, is designed to be compliant with the Green Building Index (GBI) and the Malaysia Digital Status (formerly known as the MSC status).

In addition, Masrun continues, the building boasts “many state-of-the-art technology and infrastructure” such as the building automation system, turnstile system and the latest visitor management system that is currently being upgraded and is expected to be completed by 1Q2023. Rahim & Co hit the ground running when it took over the management of the property on January 2020.

“Some part of the equipment, machinery needed a major overhaul, major repair works and major replacement. So based on an audit, we came up with a capex (capital expenditure), which focused on these four main areas,” says Masrun.

Rahim & Co building manager Mohd Nazrizam Mohd Zaharudin notes that the capex was close to RM500,000. “During that time, our chiller system also broke down and there were a lot of issues, especially with the M&E (mechanical and electrical) systems. Since then, we have implemented corrective maintenance and more preventive maintenance.”

One of the challenges was, of course, the Covid-19 pandemic that came not long after the property management team came on board. “During the pandemic, it was difficult to get upgrading works done. Only this year, we can catch up on all the outstanding work such as upgrading the turnstile and especially the security and firefighting systems,” says Mohd Nazrizam.

Currently, MOF Inc Tower only has a sub-panel for the firefighting system, as the main panel is installed in the 50-storey Naza Tower, with which it shares the retail podium. “We have a sub-panel because the previous installation was designed to serve both towers [as one]. Now that the buildings have separate owners, we are planning to have our own main panel. Even for the lifts, we only have the sub-panel.

“We are in the process of shifting the maintenance of the building to our own building because it is important for us to receive the first signal in the event of any emergency. Currently, if there is any emergency in the building, Naza Tower would receive a signal before us. So, I think shifting it over would be good for the building’s safety,” Mohd Nazrizam explains.

It is not easy, however, he adds. “As the main cable is already laid, it is quite difficult. We need to call in a specialist to create a new route to the building. This is the main programme that we intend to do here,” he says. Working closely with all stakeholders

Being part of a mixed-use strata also comes with its share of challenges. One such challenge is renovations, says Mohd Nazrizam. “As the common areas do not belong to us, when tenants want to do renovations, we need to liaise with the JMB (joint management body) for them to allocate a roro bin for the contractor. And during renovation works, most contractors would place their roro bin at the service area, and some F&B operators would treat the bin as their food waste disposal area.

This is why monitoring is very important, says Masrun. “If you dispose of construction materials and F&B waste together, it would attract pests and all that; the F&B waste must be disposed of separately. This is a common problem with any development with F&B. As the monitoring is under the JMB, it is important for us to work together with them.”

As Platinum Park is home to various tenants, including a good number of F&B outlets, the management team at MOF Inc Tower has to work closely with the JMB on renovation hours. “Especially when it involves areas that belong to the JMB,” says Mohd Nazrizam.

For example, things like installing the new MOF signage in front of the building that might disrupt the F&B businesses in the evening, or façade cleaning that might affect traffic flow in the day, he adds. “If it will involve areas that fall under the JMB like the car park or retail areas, we need to inform the JMB earlier. Or if there are any disruptions to their business, we need to put the works on hold until after their operational hours.”

To complement the three existing Grade A offices, which include Menara Felda and Naza Tower, there are plans for two residential towers and a hotel and serviced residence tower at Platinum Park.

In addition to the JMB, the team also works closely with the tenants of the building. Masrun says, “Tenancy engagement is very critical for our line of work. Basically, a good management team will meet with the tenants to find out what issues and problems they are facing. I think it is a very important job scope for the building manager. If we can build a good rapport with them, issues can be solved quickly. It is our function to help make them feel comfortable and safe at the building, at the same time helping the landlord retain the tenancy of the building, which is very important.”

“We also try to help our tenants look for contractors, for example if they have air-con or plumbing issues. We have our own panel of contractors that they can contact,” adds Mohd Nazrizam. To bolster MOF Inc Tower’s financial sustainability, Masrun says cost optimisation efforts were made. “One of the things we do is contractual cost control using economies of scale. At Rahim & Co, we have a very big procurement database, which gives us negotiating power. So we can offer the owner/landlord more competitive rates.

On top of that, the team is looking at energy management. “Based on Tenaga Nasional Bhd’s regulation, we cannot implement energy saving systems less than seven years [after the building’s completion]. So, at the moment, we plan to change all the existing bulbs to LEDs. We have already changed most, or 80% to 85% of the common lighting to LEDs,” says Mohd Nazrizam. The management team has also proposed a prudent energy management programme for the building. “Basically, we study the whole building and identify areas that get natural lighting. Some areas will require shorter hours of lighting, some will require longer, so we set timers for it. This reduces cost,” Masrun explains.

According to Masrun, the rent hovers at RM5 to RM7.50 psf, excluding service charge. “It is competitive compared to other buildings within the area. It is currently a tenant’s market.” Meanwhile, works are ongoing for a cafeteria within the building, says Mohd Nazrizam. “We also plan to have a gym. These will be on the 10th floor, the facilities level. The cafeteria is expected to be operational by 4Q2022.”

The team is also looking into solar panels for the building, says Mohd Nazrizam. “But we still need to study the ROI (return on investment) as well as the location for the panels. For example, we have two roof tops, one on the low zone (Level 10) and one on the high zone (Level 39). We have limited space, but we are trying to fully utilise them for the solar panels. This is still a case study.”

Masrun says, “I think the solar panel initiative is big because the building is designed to meet GBI guidelines. Depending on the suitability in terms of cost and space, I hope it will materialise because electricity is a major cost to the building owner, especially with the new rates coming up.

“Because the building is designed to be GBI- and MSC-compliant, we are going to work with the landlord to pursue the GBI certification and Malaysia Digital Status for this property because international companies especially, they look for buildings with such recognition. This will add value to the building and elevate its status and tenant profile.” The lobby and waiting area (Photo by MOF Inc Tower)