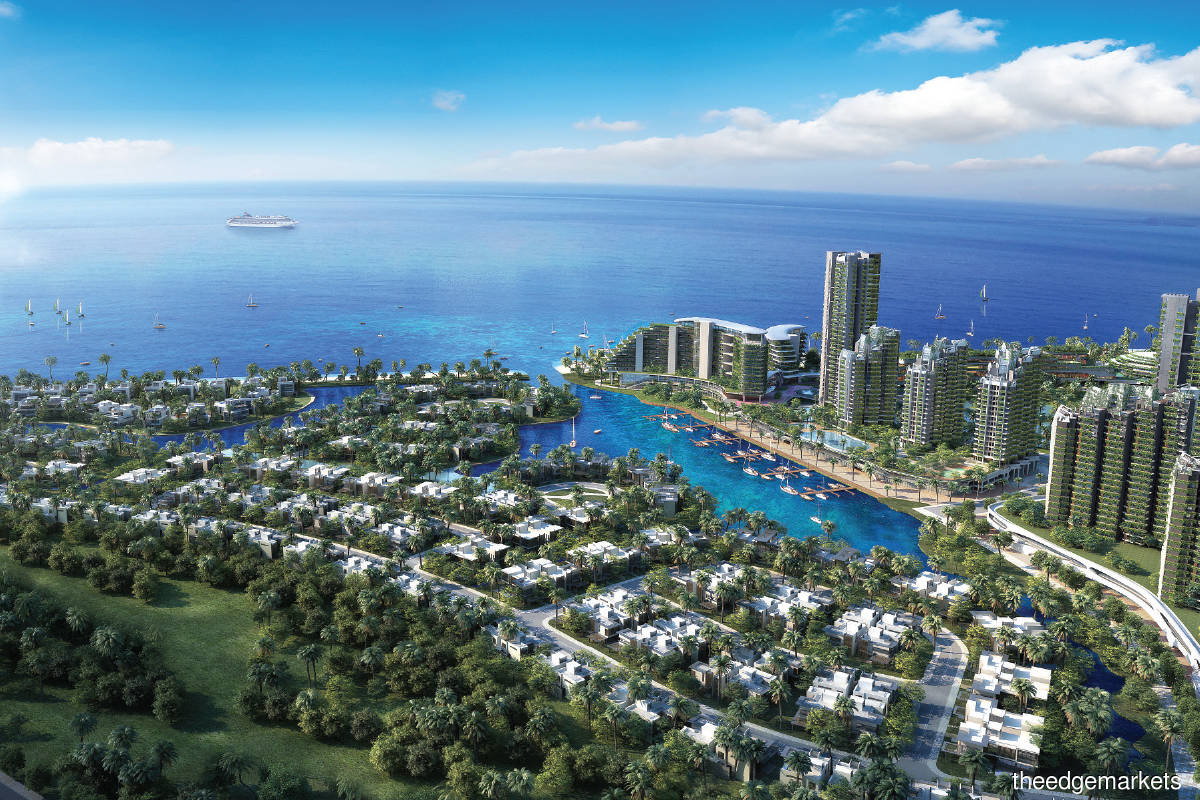 The Forest City project is largely funded via capital injections from Country Garden, with an estimated 50% to 60% of the cost being funded by the headquarters. (Photo by Country Garden)

THE Evergrande Real Estate Group debt crisis will not have a major impact on the financial health and operations of Country Garden Holdings Co Ltd in Malaysia, say analysts who are monitoring the situation.

This is because any implication will be short term in nature and only affect the appetite of the Mainland Chinese for properties, and not the health of the financial system itself, a head of research at a local investment bank tells The Edge.

“However, projects that have already been partly sold should not have an issue. Any sentiments affected should be short term.”

Country Garden is the largest real estate developer in China in terms of sales. It has a huge project in Malaysia in the form of Forest City in Johor. The project is a joint venture with Kumpulan Prasarana Rakyat Johor Sdn Bhd and the Sultan of Johor Sultan Ibrahim Sultan Iskandar through Esplanade Danga 88 Sdn Bhd.

The 30-year project encompasses a total planned development area of 30 sq km and has the right for land reclamation development of four islands with an area of about 20.05 sq km.

By comparison, Putrajaya has a land size of 49 sq km, making Forest City slightly half the size of the federal administrative centre. The development cost of the project is estimated to be about US$100 billion. According to Country Garden’s Malaysian representative, the completed reclamation area to date is about 2.64 sq km, which is around 13% of the total reclaimable area. The total construction area has reached 3.78 million sq m, consisting of 26,000 residential units, 74,000 sq km of commercial buildings and 2.71 million sq m of landscape areas.

Country Garden is in the spotlight due to fears of a contagion effect from the debt crisis at Evergrande and the overall slowing of China’s property development sector. However, a former official at Country Garden says that unlike Evergrande, the group is much more conservative.

“From the onset, when we planned Forest City, we set out that we would only reclaim the land when there was sufficient demand for it. The whole approval site is much bigger than what has been reclaimed so far, and the project horizon is very long. Therefore, from the start, we knew that we would go through economic cycles and change of policies,” he adds.

When the oversupply of high-rise and high-end residential units in Johor became apparent, the group pivoted towards developing properties to create industries in Forest City, as it was quite clear that it wouldn’t be sustainable to only focus on residential properties, says the former official.

The Forest City project is largely funded via capital injections from Country Garden, with an estimated 50% to 60% of the cost being funded by the headquarters, he says.

Notably, the local company Country Garden Real Estate Sdn Bhd has also embarked on a sukuk programme worth RM1.5 billion. Eleven tranches have been issued so far for a total outstanding amount of RM1.1 billion.

This shows that investors are still very receptive to Country Garden’s debt papers issued in Malaysia. The IMTN programme is rated by RAM Ratings.

According to RAM Ratings analyst Karin Koh, the rating agency is currently doing the annual review on Country Garden and will be publishing the rationale next month. In the meantime, the rating agency acknowledges that the slowdown and regulatory tightening in the Chinese property market, as well as Evergrande’s debt crisis, have affected market confidence and market access for some of the developers there.

“That said, Country Garden is one of the major and financially stronger developers, and has so far been able to tap the capital markets. The rating of its Malaysian subsidiary, which reflects the credit profile of Country Garden, remains intact at AA3(s)/stable,” says Koh in a reply to The Edge’s questions.

While Country Garden’s sukuk programme is not showing signs of distress, it is not to say that the Evergrande meltdown will not have a contagion effect on other Chinese property developers and the country’s financial system.

However, due to the importance of the real estate sector to China’s economy, Beijing is expected to step in to contain the crisis, says Imran Yusof, head of research and vice-president at MIDF Investment Bank Bhd.

“We believe that there is certainly a possibility of a contagion effect following the fallout from Evergrande. However, we believe that any contagion will be contained as our base case assumption will be that the Chinese authorities will intervene to ensure that it does not affect the rest of China’s economy,” says Imran in a written response to The Edge’s questions.

“As we understand, this is the view taken by the investing community as well. Having said that, we opine that the contagion is not entirely due to the problem that Evergrande is facing currently but more to the systemic problem of China’s real estate sector, where it contributes about 29% of its GDP.”

According to Country Garden’s 2021 interim financial report for the first half of the year ended June 30, the group’s cash stood at RMB186.24 billion (RM120.64 billion). Its short-term debts — bank and other borrowings repayable within one year — stood at RMB75.33 billion.

This gives the group a cash to short-term debt ratio of 2.47 times, way above the one-time ratio required by the Chinese authorities. Meanwhile, its total bank and other borrowings stood at RMB205.99 billion as at June 30.

Its net gearing ratio stood at 49.7%, according to the interim financial report. This was lower than the 55.6% as at Dec 31, 2020, and way below the 100% threshold imposed by the Chinese authorities on real estate companies.

On the net gearing ratio, the former official of Country Garden says the group had always taken prudent measures such as limiting its net gearing ratio to just 70%, despite the Chinese authorities allowing up to 100%, to ensure that the group is never caught in a liquidity crunch.

While the three red lines are meant to deter real estate companies in China from being involved in speculative and high-risk projects, it has caused developers that had already been on a debt binge and involved in high-risk investments in the years prior to the regulation to face a liquidity crunch.

“Evergrande has always been one of the more aggressive players. Its risk profile has always been extreme. There was a mounting debt mismatch, and when the Chinese regulations changed, it got caught,” says the former official.

Being one of the largest players in an industry that contributes more than a quarter of China’s GDP, Evergrande by itself contributes about 2% to 3% of the country’s economy, when the contribution from all its associated vendors and suppliers are counted, he adds.

Therefore, the Evergrande meltdown will have an effect on investors’ confidence in the Chinese real estate sector as well as its financial system because a lot of the banks there are exposed to the group, says the former official.

“If there is a default by Evergrande, it will affect China’s property market. Even prior to the crisis, it was not easy for Chinese property developers to get investment ratings from the top three rating agencies. From now on, it will be even tougher,” he adds.