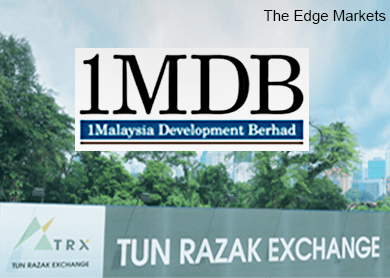 KUALA LUMPUR (May 13): 1Malaysia Development Bhd (1MDB) has managed to rope in an Indonesian property developer, the Mulia Group, to develop its Signature Tower in the Tun Razak Exchange (TRX), a project which Lembaga Tabung Haji (LTH) was earlier rumoured to be keen on.

In a statement this morning, 1MDB Real Estate Sdn Bhd (1MDB RE), a wholly owned unit of debt-laden 1MBD, announced it has signed the sales and purchase agreement with the Mulia Group for the development rights of the plot. “The land transaction is valued at RM665 million,” the statement said.

The statement also did not reveal the size of the tract that the Mulia group has acquired.

1MDB has in recent weeks looked for buyers for its tracts in TRX. This is perceived to be its fund raising exercise to meet its debt obligation as the government’s strategic investment fund will be due to pay US$975 million to a consortium led by Deutsche Bank.

The Singapore Business Times quoted sources reported that the consortium of banks intends to demand for an early payment before the amount is due in September.

“The offshore loan, led by Deutsche Bank Singapore and syndicated to five Gulf banks including Abu Dhabi Commercial Bank, is guaranteed by the Malaysian government. But the creditor banks have turned panicky — some more than others — as the loan is secured with 1MDB's wholly-owned Brazen Sky's US$1.103 billion, which the state-backed firm has said is being kept at Swiss private bank BSI Singapore here,” The Singapore Business Times wrote.

On the land transaction, 1MDB RE, the master developer of TRX, its chief executive officer Datuk Azmar Talib said, “We are pleased to have the Mulia Group on board towards realising the potential of the TRX. This significant investment underscores foreign investor confidence in Malaysia."

President director and owner of the Mulia Group Eka Tjandranegara said as one of the biggest commercial property developers in Indonesia, the group is excited to be embarking on this project to develop the Signature Tower to become the new landmark of Kuala Lumpur city.

"Our Mulia Group wishes to be an integral part of this iconic state-of-the-art development not only for Malaysia but for the region and beyond.

“We see TRX’s potential to further develop the city’s role as a financial capital, and the Tun Razak Exchange aids our growth and expansion plans. I am committed to personally seeing this project through, drawing from our vast experience," said Eka.

The TRX project is currently in the limelight after 1MDB has sold one parcel of 1.56 acres (0.63ha) of land to Tabung Haji for RM188.5 million cash last week.

Tabung Haji is reported to have decided to sell off the piece of land to Kumpulan Wang Persaraan (Diperbadankan) (KWAP) for between RM1 billion and RM1.2 billion for both the land and a 40-storey tower on the site. But KWAP said it has no investment commitment to TRX.

The land deal between 1MDB and Tabung Haji is seen as a bailout by the pilgrim fund. It also raised the question of conflict of interest considering LTH’s group managing director Tan Sri Ismee Ismail is also a director of 1MDB. Tan Sri Ahmad Samad Alias is a member of Tabung Haji’s investment panel and 1MDB’s advisory board. Also, Tabung Haji’s deputy group managing director and deputy CEO Datuk Johan Abdullah is also chairman of Edra Global Energy Bhd, a unit of 1MDB.