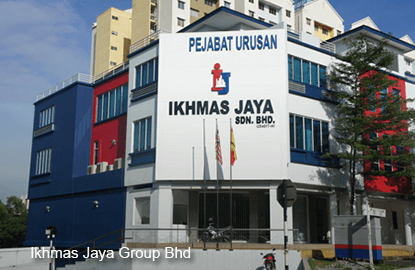 KUALA LUMPUR (July 27): Ikhmas Jaya Group Bhd, which made its trading debut on the Main Market of Bursa Malaysia today, is the most traded stock as well as the day's top gainer.

Its shares opened at 68 sen, an 11 sen premium to its issue price of 57 sen, with 126 million shares changing hands.

Later at a press conference after its listing ceremony, Ikhmas Jaya group managing director Datuk Ang Cheng Siong said: "I think the (opening) price is fair and reasonable. It reflects our strong fundamental."

He said the piling and engineering specialist is eyeing projects related to the Kuala Lumpur–Singapore High Speed Rail, as it falls within the group’s area of expertise.

Currently its order book stands at RM346 million, which is made up mostly of construction projects.

“We are relatively confident of sustaining a strong growth in the coming years, owing to the high construction [order] book that we have, and we are working very hard to get more projects,” he said.

The group’s main projects are currently located within the Klang Valley and Selangor, but does not discount the possibility of taking up work outside the areas.

“Currently, [our work] happens to be in Klang Valley, but we don’t restrict ourselves. As long as there is an opportunity available in any of the states [in Malaysia], we will do it,” Ang explained.

Ang added that the group is focused on the local market for the time being, and does not have any plans to go abroad in the near term.

“One of the primary reason is because the local construction sector is still very buoyant upon the roll out of the many government construction projects, and there is likely to be shortages for piling specialist or skilled workers in this particular sector,” he said.

Ang added that beyond five years, the management might consider venturing into other countries with potential to provide a good profit margin to the group.