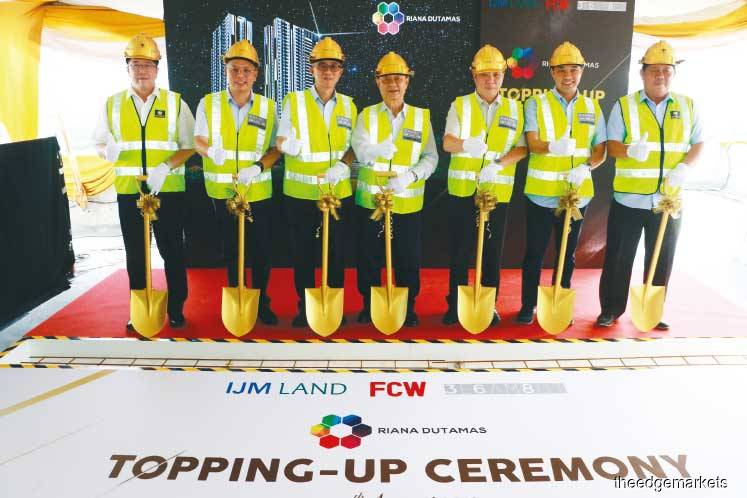 IJM Land Bhd will be launching Phase 2 of Savio at Riana Dutamas in Segambut by the end of this year. The project is being undertaken by 368 Segambut Sdn Bhd, a joint-venture company between FCW Holdings Bhd and IJM Land.

Situated on a 5.06-acre freehold parcel, the mixed-use development has a gross development value (GDV) of RM585 million and will include 921 serviced apartments.

“Phase 2 will have two 34 and 35-storey towers comprising 2 to 4-bedroom units with built-ups of 720 to 1,210 sq ft. Prices start from RM575 psf. Two parking bays will be allocated to each unit,” said IJM Land managing director Edward Chong at a topping up ceremony on Aug 30.

Savio, which forms part of the RM1.5 billion Riana Dutamas that is being built on a 16.15-acre freehold parcel will be developed over three phases.

“We are planning to build a pedestrian walkway at the development, which will be within walking distance of the Segambut KTM Komuter Station connecting to KL Sentral,” said Chong.

“[For Riana Dutamas], our target market is homebuyers of every generation, ranging from first-time homebuyers, mature buyers, young professionals, individuals to multi-generational [families]. We are also targeting seasoned investors and those who live in the area,” said Chong.

“We are thrilled to hit this milestone with the development of [Phase 1 of] Savio, which commenced in January last year. In keeping with our commitment to quality and keeping within the time frame, we have completed Savio Phase 1’s structural work up to the final floor within 19 months,” said Chong.