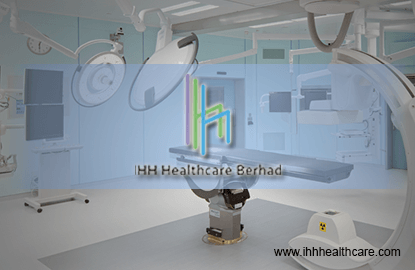 Stripping off the exceptional items and the contribution from PLife REIT, IHH said its operational profit after tax and minority interests (PATMI) were down 11% at RM177 million due to financing costs for the acquisition of Global Hospitals, which closed during the quarter, loss from newly acquired hospitals and higher depreciation expenses primarily on the opening of new hospitals.

"We are pleased to report a solid financial performance in FY15 despite the ongoing volatility in the global economy," IHH managing director and chief executive officer Tan See Leng said in a separate statement.

"We have grown rapidly in the past few years, including undertaking transformational acquisitions to become a leading hospital player in India, making further inroads into the tertiary market in China and entering a new market in Myanmar," he added.

Going forward, Lim said IHH will build on this success with its commitment to enhance service offerings in existing hospitals and continue to extract maximum business synergies.

"IHH will ensure a continued strong pipeline is brought onstream in 2017, including opening of new flagship hospitals in Hong Kong and China," he added.