Cumulatively for the full FY14, DPU was 7.79 sen representing 5.2% dividend yield (after taking into account withholding tax of 10%).

IGB REIT FY14 revenue grew by 7% year-on-year (y-o-y) to RM461.8 million attributed to higher rental income. We believe this was likely due to positive rental reversion at Mid Valley Megamall and The Gardens Mall.

IGB REIT CNI grew 12.4% y-o-y to RM232.6million. Growth in CNI was stronger than its revenue growth of 7% y-o-y. This was contributed by improved Net Rental Income margin to 67.7% in FY14 against 66.3% last year. We believe that management is likely to have implemented cost saving measures as reimbursement costs declined 14% y-o-y to RM44.9 million while maintenance expenses slipped 6% y-o-y to RM19 million.

Our TP is based on Dividend Discount Model (required rate of return: 7.5%, perpetual growth rate: 1.3%). Our neutral recommendation is based on the lack of any near-term rerating catalysts. The next possible asset injection (South Key Mall) is still undergoing construction and is expected to be completed only in FY17. — MIDF Research, Jan 28 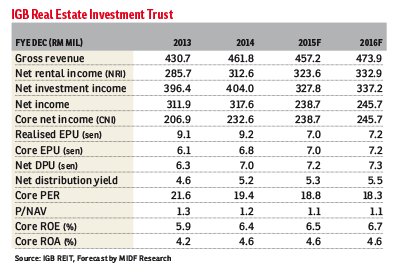