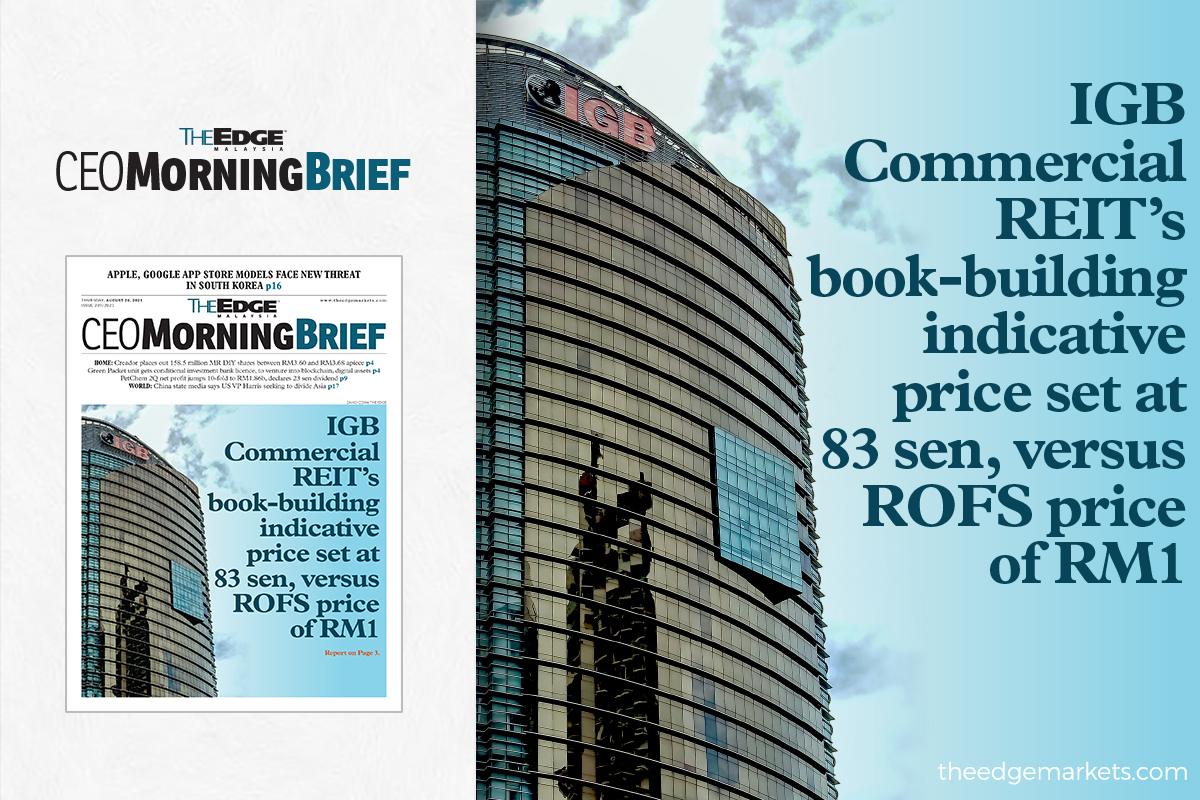 KUALA LUMPUR (Aug 26): IGB Commercial REIT, which is tentatively slated to debut on the Main Market on Sept 20, has set the indicative price for the institutional portion of its initial public offering (IPO) at 83 sen apiece.

That marks a 17% discount to the RM1 per unit it offered under its restricted offer for sale (ROFS), according to its supplementary prospectus for the listing dated July 28. Based on the term sheet sighted by The Edge, the book building process will begin on Aug 30 and close on Sept 2.

In a statement to The Edge, IGB Bhd clarified that the lower indicative price set for the institutional portion now versus the ROFS will not affect the offer price for the ROFS, as the price an entitled shareholder of IGB is required to pay for the ROFS units has already been fixed at RM1, so entitled shareholders will receive three dividend-in-specie (DIS) units without any consideration, for every two ROFS units subscribed, resulting in an effective price of 40 sen per unit.

"IGB is not offering any units in IGB Commercial REIT to investors other than to its shareholders and will remain in control of IGB Commercial REIT upon its listing. The institutional offering is to facilitate entitled shareholders (including minority shareholders) who decided not to take up the ROFS units, to offer their unsubscribed ROFS units and the corresponding DIS units to institutional investors and selected investors via a book building exercise," IGB said.

The REIT previously announced on July 2 that its listing that was scheduled for July 30 would be postponed. It also announced then that the institutional portion of its IPO would be downsized to at least 130 million units from 282 million units previously, which lowered the minimum public unit holding spread from 25% to 20%.

It said then that the lower public unit holding spread would “help achieve the best possible book building price, which in turn will improve the value to the entitled shareholders”.

The postponement was understood to be due to feedback it received from entitled shareholders, who had said that the Full Movement Control Order had posed difficulties to them to subscribe for their entitlements under the ROFS.

IGB Commercial REIT previously said its IPO involved a restricted offering of up to 945 million units, and an institutional offering that it had now trimmed to at least 130 million units.

The restricted offering includes the ROFS of up to 378 million units at RM1 each to IGB shareholders on the basis of two ROFS units for every five IGB shares held. There is also the DIS of up to 567 million units in IGB Commercial REIT, on the basis of three DIS units for every two ROFS units subscribed, which effectively grants IGB shareholders five units for RM2 if they decide to take up the ROFS.

In an interview with The Edge in early July, IGB group CEO Datuk Seri Robert Tan Chung Meng said the REIT was in talks with funds, although no commitment was secured yet back then.

“Many are very interested but all of them are just talking about yield. I tell them to show me companies that can give me more than a 5% yield,” he said.

“Here, we are giving out over 90% of our distributable income. So, this is the difference. If we can’t achieve a 5% yield next year, then the economy will be in dire straits,” added Tan, who is also managing director of IGB REIT Management Sdn Bhd, the management company of IGB Commercial REIT.

To demonstrate confidence in the REIT, he said IGB would still own a stake of over 56% in the REIT post-listing.

He also said IGB shareholders were getting a good offer, although the group noticed a wait-and-see attitude, adding that it is better to invest in something solid, given the current climate.

“Our assets and valuations are priced at pandemic levels. If you think the pandemic will drag on longer, then don’t touch the shares,” he said.

(Note: This story has been amended and updated with a clarification from IGB Bhd on Aug 30, as the previous version contained the sentence: "The lower indicative price for the share placement is an indicator of possible lower price for IGB Bhd's shareholders to subscribe to the ROFS.", which is incorrect. The error is regretted.)