The stock remains an “add” with potential catalysts such as strong earnings growth outlook, higher-than-expected China sales and move to the Main Market Board this year.

IFCA’s earnings growth outlook will be driven by three factors — goods and services tax (GST) software upgrade, China and migration to a mobile-based platform. This year, IFCA should see a short-term boost from GST software upgrades.

The company estimates RM50 million to RM60 million in potential GST upgrades work. Some in RM15 million revenue was likely completed in 2014.

China has 46,000 property companies and IFCA has just slightly over 100 customers in this country. Unlike Malaysian developers who purchase whole software packages, China developers usually only buy one software module at a time.

So far, IFCA has only sold two to three modules out of the 13 offered, an indication of the potential of China’s market.

As for migration to mobile platform, IFCA currently has around 1,400 customers in Malaysia and we understand only around 50 companies have moved  to its new mobile app-based platform. Management is studying the possibility of “renting” its software online (using cloud) and subscription could be based on a monthly or annual basis.— CIMB Research, Feb 4 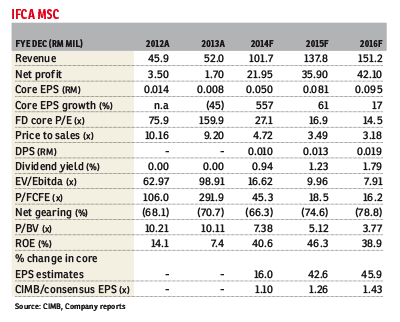