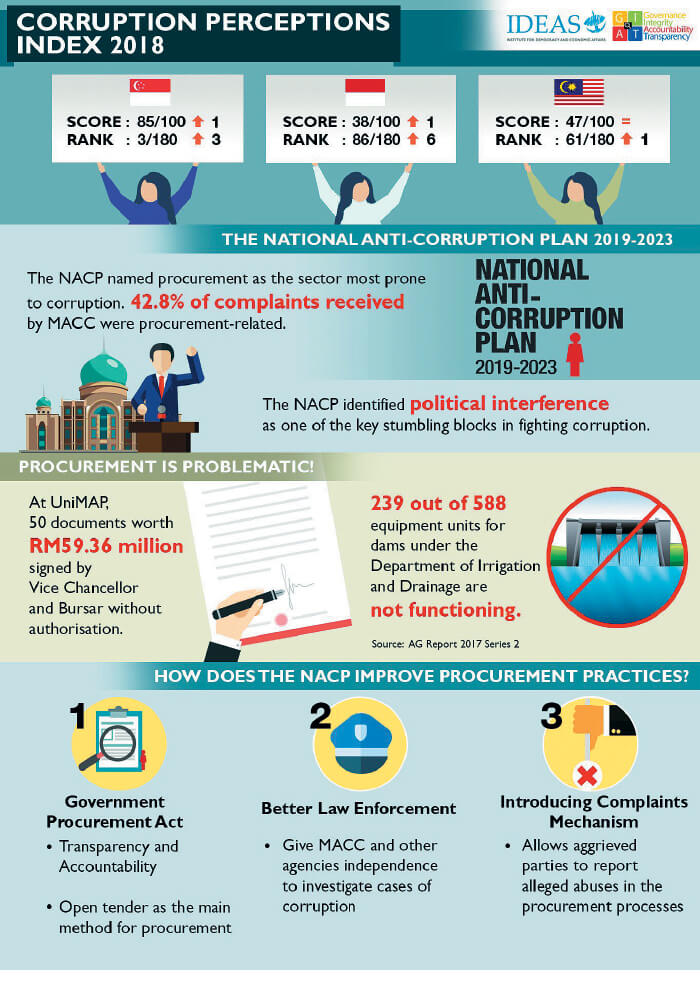 The past few weeks have seen two corruption-related events making the headlines. The Corruption Perceptions Index (CPI) for 2018 was launched on Jan 29, the same day as the National Anti-Corruption Plan 2019-2023 (NACP). The latter is a signal that the Pakatan Harapan (PH) government is serious in fulfilling its campaign promise of tackling corruption at its core.

In contrast, Singapore moved up three spots from last year due to a one-point increase in score, resulting in it being ranked third globally alongside Finland, Switzerland and Sweden with a CPI score of 85, nearly double that of Malaysia’s. Meanwhile, Indonesia jumped six spots to 86, having increased its CPI score by one, from 37 to 38. Critics would say Indonesia is not a good example to cite but its performance in the CPI has improved year on year.

Malaysia’s stagnant CPI score is an indication that we have to do a lot more to resolve corruption holistically. The NACP could prove to be a vital step in addressing the endemic corruption in major areas of government. A vital part of the plan is the acknowledgement that public procurement is one of the risk areas in corruption as it is “vulnerable to corruption and other illegal activities”, citing weak governance in procurement practices as a reason.

Public procurement is by no means a small part of government activities. Malaysia spends more than RM150 billion every year on government procurement, almost one-fifth of its nominal GDP. The public would expect the government to use such large sums of the nation’s money as wisely, transparently and efficiently as possible.

Unfortunately, the NACP reveals that the procurement sector is highly prone to corruption, recording the highest number of complaints (42.8%) received by the Malaysian Anti-Corruption Commission (MACC) from 2013 to 2018. The MACC also found that from 2012 to 2014, the majority of recorded cases were due to political interference in procurement within the construction sector. The NACP shows that based on the corruption trend from 2013 to 2018, the public sector was found to be highly vulnerable, with a vulnerability rate of 63.30%.

The Auditor General’s Report continues to highlight several cases of corruption, negligence and non-compliance in many government contracts and projects. These range from money being spent outside the scope of a contract, improper payments and inflated costs to the provision of poor quality goods, works and services. The public is then forced to shoulder the costs of the wastage and leakages.

For example, the AG Report Series 2 Year 2017 reported that during efforts to repair and resupply schools in Kelantan, Terengganu and Pahang affected by the December 2014 floods, RM1.09 million was spent on six schools that were unaffected.

Due to the numerous issues in procurement, the NACP has set forth 16 initiatives under “Strategy 3: Increasing the Efficiency and Transparency in Public Procurement”, which focus on improving Malaysia’s procurement regime through one, two or five-year initiatives that tackle specific problem areas.

Overall, most of the initiatives in Strategy 3 look good on paper, though there is some room for concern regarding some of the content and feasibility.

First, in his Budget 2019 announcement, Finance Minister Lim Guan Eng initially stated that the government planned to table the Government Procurement Act (GPA) in 2019. Yet initiative 3.1.5 of the NACP states that the “milestone” to “introduce legislation on public procurement” would be within five years, that is, until December 2023.

If “milestone” means the timeframe to achieve an initiative, this could raise a possible problem. The GPA may not see the light of day by the 15th general election, which has to be xheld before or on Sept 23, 2023, and there is no guarantee PH will retain Putrajaya. The government must set a clear deadline to table the GPA to prevent a return to the old corrupt practices in procurement.

Secondly, the NACP needs to curb the frequent abuse of non-competitive procedures. Public procurement has been plagued by cases of contracts being awarded through direct negotiation rather than competitive open tenders.

Due to its opaque nature, direct negotiation is more vulnerable to negligence, non-compliance and bribery. The solution is to use open tender as the main method of awarding contracts as it promotes transparency and provides the best value for money.

Hence, C4 recommends that the threshold be reduced to at least RM200,000 to ensure that competitive open tendering is utilised more often.

Lastly, Initiative 3.25, “to establish procurement complaints mechanism for aggrieved parties”, is a positive sign. It will help to hold public officials accountable and reduce the frequency of weaknesses, wastage and leakages in procurement.

However, for the complaints mechanism to be effective, the agency concerned must have full and independent authority to investigate any complaint received from bidders and the public against public officials. Furthermore, it should be given the power to discipline, prosecute and punish offending officials. This would send a clear message that the government gives no quarter to corruption in procurement.