ASIA KLASIKA celebrated its 5th anniversary by showcasing iconic cars to the public amid the scenic Pullman Putrajaya Lakeside. The 5th Malaysia International Vintage and Classic Car Concours featured some of the finest automobiles from around the region to car enthusiasts.

Emulating world-renown Californian Pebble Beach Concours d’ Elegance and Salon Privé London Concours, Asia Klasika displayed some of the finest automobiles from 50 participants to the 10,000-strong crowd that turned up for the event.

Asia Klasika’s Pullman Sale, presented by Kuala Lumpur & Temasek Classic Automobiles Sdn Bhd, highlighted the sale of investment-grade cars such as a pristine 1983 fuel-injected Ferrari Berlinetta Boxer 512 with an asking price of RM1,880,000. Buyers with a fascination for convertible classics were also spoilt for choice with a selection of cars including a 1956 Austin-Healey 100/6, 1953 MG-TD and a 1967 Alfa Romeo Giulia GTC. The Pullman Sale fetched a total of more than RM8 million.

In conjunction with the theme, “A Gathering of Thoroughbreds”, the concours featured a top-of-the-range selection of automobiles from North America and Europe. Also in keeping with tradition, royal patron the Sultan of Johor, Sultan Ibrahim Sultan Iskandar, displayed his magnificent cars in conjunction with the festival this year.

Sime Darby Auto Connexion (SDAC), which markets Ford cars in Malaysia, took this opportunity to officially launch its fully imported hot hatch, the 2014 Ford Fiesta ST, and announced of the local introduction of the all new right-hand-drive Ford Mustang in 2016.

Making its debut at Asia Klasika was Rally Klasika, a Tour d’Elegance of Putrajaya, and a procession of 25 vintage and classic in a pre-concours tour of scenic Putrajaya.

Kevin Kong, one of the rally participants driving a 1967 Porsche 912, said the route around Putrajaya was well planned, and that the festival showcased a good mix of cars of various models and ages. 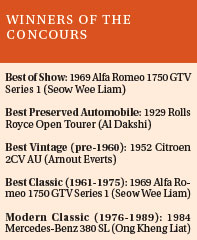 The winner of this year’s highly coveted Sultan Ibrahim Cup was Larry T S Lim from Singapore, who is the proud owner of a 1953 Bentley R-Type Continental.

Curator Andrew Suresh said he was very pleased with the response from partners and participants to the festival, which he said was a platform for car manufacturers and collectors to showcase collectible cars to motoring enthusiasts in the region.

This article first appeared in The Edge Financial Daily, on November 10, 2014.