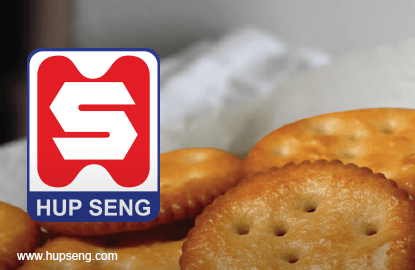 According to Hup Seng (fundamental: 3.0; valuation: 2.1), the weak ringgit and successful modification in pricing strategy for its biscuits were also contributing factors to the better earnings.

It also noted that benign growth in demand for biscuits in the local and export market have contributed to increase in sales volume.

Its latest quarterly revenue came in 4.4% higher at RM71.24 million from RM68.25 in the previous corresponding quarter.

Hup Seng said Cream Crackers continued to be the strong performer in terms of growth for the group during the period.

“The external environment is expected to remain tough under the current environment [that is] fraught with uncertainties and challenges.

“However, soft CPO (crude palm oil) and crude oil prices, coupled with favourable demand for the groups’ products, have contributed strongly to the earnings for the group in the first half of this year,” it said.

Hup Seng added that recent reports on forecasts for global supply and demand for these commodities suggest a price recovery in the second half of 2015 may not happen.

“This bodes well for the group’s performance for the remaining part of the year,” it noted.