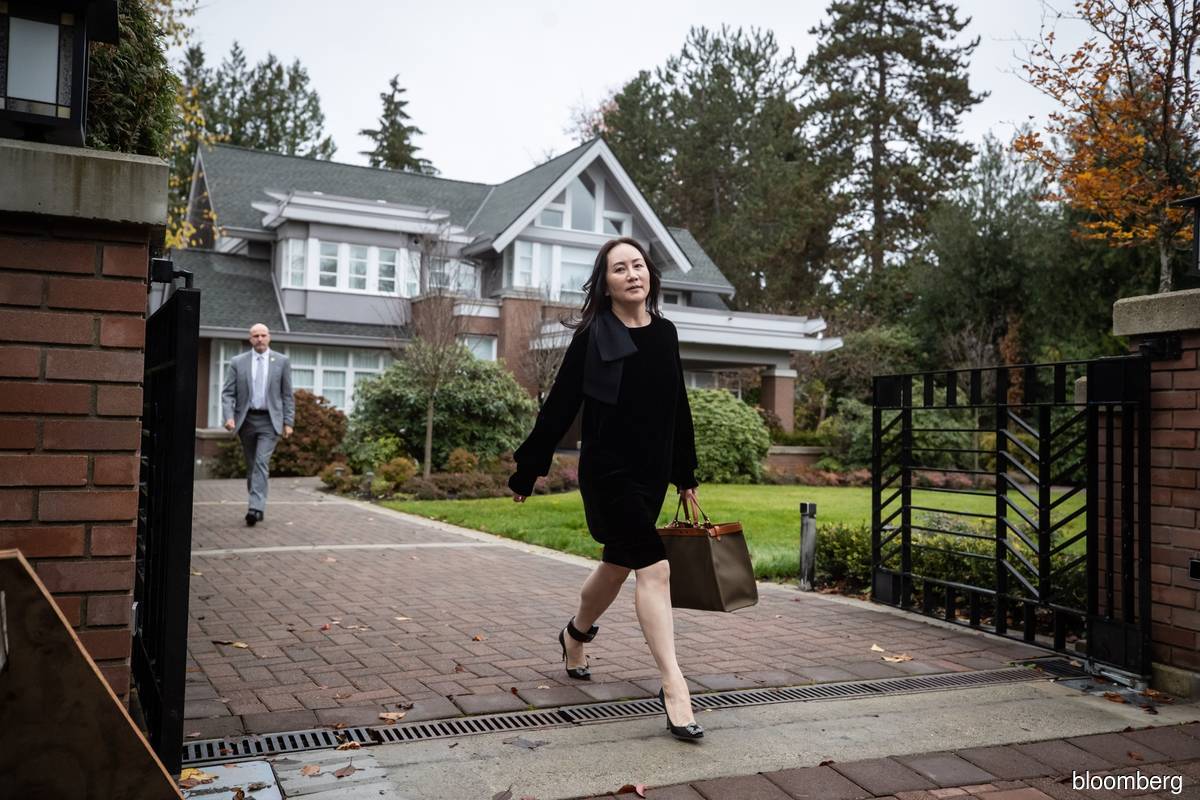 When one court decision last year presented her with her first shot at release, a China Southern Airlines jetliner was chartered, ready to whisk her back to China (the decision went against her.

VANCOUVER (Jan 13): For two years, few outside the inner circle of Meng Wanzhou have known how one of China’s most powerful tech executives has whiled away her days in Vancouver, while battling a US extradition request.

That was until a court hearing Tuesday provided some stunning insights into the Huawei Technologies Co chief financial officer’s life of affluence while on bail. Meng spent Christmas Day at a restaurant that catered exclusively to her party of 14. When one court decision last year presented her with her first shot at release, a China Southern Airlines jetliner was chartered, ready to whisk her back to China (the decision went against her). She goes on shopping sprees at high-end Vancouver boutiques that set aside space so that she can browse in private.

The revelations emerged in testimony as the court considered a request by Meng to further relax her bail terms.

She’s currently allowed to roam a roughly 100-square-mile patch around Vancouver in the company of court-appointed security guards during the day and is confined to house arrest at night.

She’s asking the court if she can move around outside her curfew hours without the guard accompaniment.

The plight of Meng, the eldest daughter of Huawei’s billionaire founder Ren Zhengfei, has become a national cause for Beijing. Her December 2018 arrest set off an unprecedented diplomatic uproar. Just days after it, two Canadians — Michael Spavor and Michael Kovrig — were detained in China, billions of dollars in Canadian exports to China were disrupted and bilateral relations deteriorated. In the US, her case cast a spotlight on a broader Trump administration effort to contain China and its largest technology company. US officials have charged Meng with fraud for having allegedly tricked HSBC Holdings Plc into processing Iran-linked transactions, putting the bank at risk of violating American sanctions. She denies any wrongdoing.

Under her C$10 million (US$7.9 million) bail terms, the 48-year-old executive wears a GPS monitor on her ankle, pays for 24-hour surveillance by a court-appointed private security firm and faces an 11 p.m to 6 a.m. curfew. During Tuesday’s hearing, her husband Liu Xiaozong testified to the court that Meng is usually guarded by a team of three on her outings, with the guards changing from day to day and traveling in the same vehicle as her. Liu fears that puts his wife at greater risk of contracting Covid-19, which is a particular concern because she is a survivor of thyroid cancer and suffers from hypertension, he said.

Liu recounted that the family used to go grocery shopping and to malls and coffee shops together, but that has become “more challenging” in part because their children feared being publicly identified due to the presence of the security guards.

The head of the security firm, Doug Maynard, later testified that his security personnel, too, had concerns about virus transmission — caused by Meng’s behaviour, as she dined in large groups that violated provincial Covid guidelines. On one occasion, the diners all sipped from the same coffee cup, he told the court.

Canadian prosecutors argue that the conditions of Meng’s bail terms are “necessary and appropriate.” “There is no reason to vary the conditions at this time,” Canada’s Department of Justice said in an email prior to the hearings.

The two Canadians jailed in China, Spavor and Kovrig, face a very different set of challenges. Indicted on national security charges, the two men were initially held at secret jails and questioned multiple times a day in cells where the lights couldn’t be turned off. Kovrig described his life as a “gray, grinding monotony” in a letter written to his wife from his windowless concrete cell. That was before Chinese officials cut off consular visits, letters and other communication, amid the pandemic last year. It’s not clear if either has had access to a lawyer during the two years they’ve been incarcerated.

China has disputed allegations of “hostage diplomacy” as “totally groundless,” saying that no one who follows the country’s laws should fear arrest. In turn, it has accused Canada of arbitrarily detaining Meng. Foreign Ministry spokeswoman Hua Chunying last month said Meng’s case was “100% a political incident”.

Final hearings in Meng’s extradition proceedings are scheduled for mid-May, though appeals could lengthen the process significantly. Some Canadian extradition cases have lasted as long as a decade.

The US case is US v. Huawei Technologies Co, 18-cr-457, US District Court, Eastern District of New York (Brooklyn).