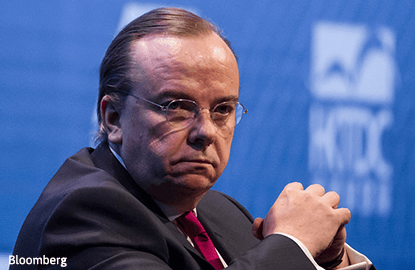 (Jan 18): HSBC Holdings Plc Chief Executive Officer Stuart Gulliver said trading operations that generate about 20% of revenue for the lender’s investment bank in London may move to Paris, quantifying some of the aftershocks for the UK after Brexit.

“Activities specifically covered by EU legislation will move, and looking at our own numbers, that’s about 20% of revenue,” Gulliver said in a Bloomberg Television interview at the World Economic Forum in Davos, Switzerland, with John Micklethwait. The bank confirmed that he was referring to the lender’s global banking and markets operations in the UK capital.

Gulliver, who runs one of the world’s most globalized banks, praised Prime Minister Theresa May’s handling of Brexit so far and also said he doesn’t expect a trade war to erupt between the US and China under incoming US President Donald Trump. Such an outcome could damage HSBC, given it makes most of its earnings in Asia. Earlier Tuesday in Davos, Chinese President Xi Jinping urged business and political elites to reject protectionism in his first public rebuttal of Trump’s rhetoric on trade.

A trade war “would clearly be negative for us,” Gulliver said. “We are the biggest trade-finance bank in the world.”

Gulliver’s remarks touched on hubs of world trade ranging from the US-Mexican border to China’s Pearl River Delta. The Davos gathering has seen policy makers and CEOs address the growing populist backlash against globalization and elites that spurred both Trump’s election in November and Britain’s vote to leave the EU in June.

Gulliver said HSBC will “proceed quite slowly” after May confirmed Tuesday that Britain will leave the European Union’s single market. He repeated his pre-Brexit estimate that 1,000 jobs at the bank’s offices in London are involved with products covered by EU legislation, which probably need to move to France when the UK leaves the single market.

“Some of our fellow bankers have to make decisions quickly” if they don’t have continental subsidiaries like CCF, the French commercial bank HSBC bought in the previous decade, he said.

Gulliver’s estimate of a 20% Brexit revenue exodus from London matches that of Credit Suisse Group AG Chief Executive Officer Tidjane Thiam. In September, Thiam said as much as one-fifth of the volume in the bank’s London operations could be affected by the loss of EU passporting rights.

May set out her most explicit vision of Britain’s future relationship with the EU in a major speech on Tuesday, pledging a “phased process” for exiting the single market that would allow financial-services firms time to adjust. Gulliver said he expects the UK financial-services industry to quickly rebound.

“Irrespective of Brexit, London will remain a global financial centre, and the revenue impact of Brexit on financial services will be made good in two to three years’ time,” Gulliver said. Although some derivatives operations may need to move, other business areas such as bond and equity trading and underwriting will remain in the UK capital, he said.

Gulliver said HSBC will especially monitor developments on work permits, given his bank’s UK operations employ about 2,100 EU citizens in the UK and 1,300 more staff from outside the bloc.

The CEO said his “operating assumption” was for the US and China to “tweak” rules on country of origin and dumping goods below fair market value, which would be manageable for HSBC. He said tougher trade barriers could balkanize global commerce, which would benefit China’s relative strength in the Asia-Pacific region.

HSBC is in the middle of a programme to redeploy as much as US$150 billion of assets to Asia and hire 4,000 people in the Pearl River Delta region around Hong Kong.

Gulliver said he was in Mexico last week and observed the concern about Trump’s rhetoric on tougher tariffs and immigration restrictions. While HSBC’s Mexican operations haven’t been as profitable as desired in recent years, Gulliver said he still expects Mexico to “represent an important manufacturing hub for US business” in the future.