How the public pension burden could bankrupt the country 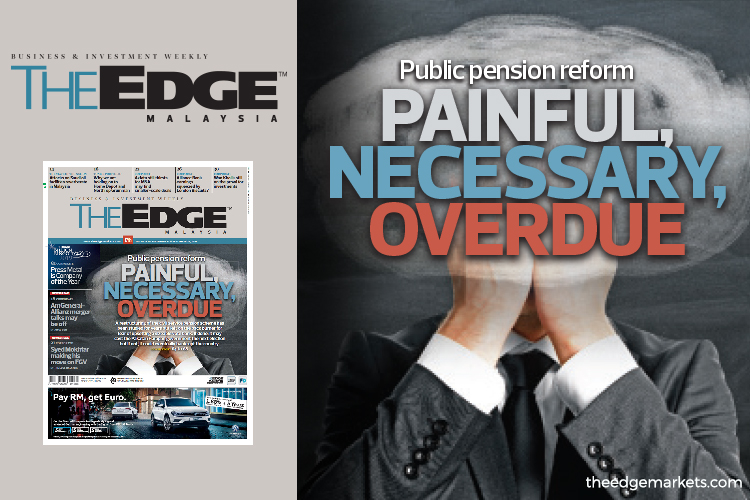 KUALA LUMPUR (Sept 20): A reform of the civil service pension scheme has been studied for years but left on the backburner for fear of upsetting a sizeable vote bank. Yet the painful reform that could cost the Pakatan Harapan government the next election is necessary and overdue.

“We are paying pension to wives and children [of deceased retired civil servants] …We want to continue [paying pensions], but we have to find a way that the government can afford and government officers don’t lose out,” Prime Minister Tun Dr Mahathir Mohamad told reporters in Kyoto on Sept 7, noting the strain of steep civil servant pay hikes in recent years as well as the RM1 trillion national debt on government finances.

“Payments of pension are now a problem… previously the monthly salaries of senior officers never exceeded RM6,000 or RM7,000, and they would receive RM3,000 pension a month. But we are also aware that living costs have increased considerably, so we need to study the pension scheme from time to time,” he told reporters separately in Alor Setar on Sept 10.

Thanks to the previous administration eagerness to please this growing vote bank, there is a 2% annual automatic increment for pension payments – neutralizing even the worry of inflation on the civil service pensioners’ income, a rarity globally where the norm is for shared burden or borne entirely by retirees instead of being guaranteed by taxpayers’ money.

Private wage earners in Malaysia -- who need to set aside money from their monthly salary into the EPF -- would have to depend on the Employees Provident Fund to earn enough money from investments to beat inflation’s dilutive impact on their retirement savings.

Those who outlive their savings (many do within five years of retirement) may have to turn to government assistance, possibly at further cost to taxpayers if public finances are tight. The impact on the economy would be worse, should the strain be a drag on businesses and consumer confidence and consumption.

Former Public Service Department director general Borhan Dolah on Sept 4 said newly appointed civil servants may no longer be pensionable but be given an improved contract scheme, possibly starting next year to reduce to government’s financial burden by up to RM5 billion a year.

The move to revamp the public pension scheme, which is “still being fine-tuned”, was consistent with the decision to reduce the civil service size in phases based on need, as recommended by the special Public Service Reform Committee meeting in October 2018.

For more details on the public pension burden and how government finances would look like if expenses grow on its current trajectory, pick up the latest issue of The Edge.