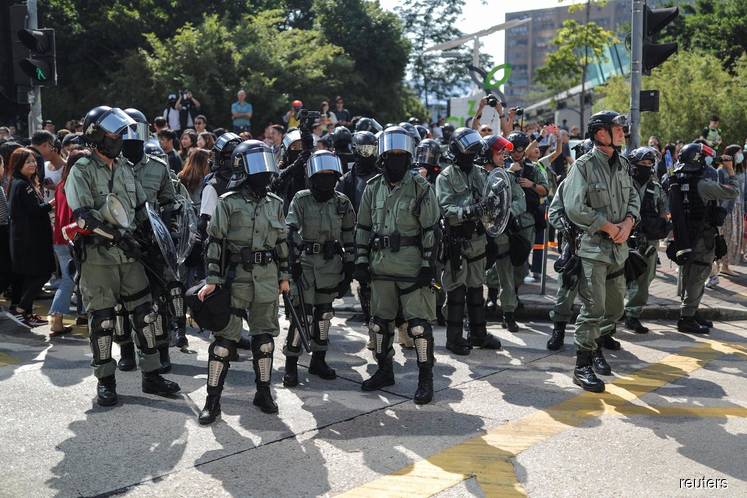 (Nov 28): Beyond Hong Kong's tear gas-drenched streets and shattered universities, another battle has been raging over the city's depiction online on the crowd-sourced internet encyclopaedia, Wikipedia.

As anti-government demonstrations have intensified, articles on subjects from Hong Kong's leadership to its police force have been ceaselessly rewritten for months on the website, used by millions everyday to check facts and untangle complex issues.

A Reuters analysis found a seven-fold surge in edits of the Hong Kong Police Force page over the 10 months to October, compared with a year earlier. Similar spikes occurred in articles about the protests and Hong Kong Chief Executive Carrie Lam.

Changes swapped facts for insults or inserted slabs of material that upset the balance of the articles.

Where it was possible to determine the location of the editor, 40% of edits were found to have been filed from computers in Hong Kong. Internet users can disguise their location by using a virtual private network (VPN).

The number of daily edits spiked during particularly intense clashes on the territory's streets, and prompted Wiki administrators to restrict editing access to some pages, a common practice adopted with controversial issues.

Now, unregistered users and very new accounts cannot alter those articles directly, but have to make a request to submit edits.

"There has been a great increase in all types of disruptive editing including vandalism, edit wars, and extreme language from both of the major perspectives," said a volunteer editor with the username MarkH21, who has 13 years' experience.

"The level of disruptive editing against the government, particularly from sources in Hong Kong, is significantly higher," MarkH21 said. The user did not respond to requests to be identified other than by their username.

"Articles about contentious topics, in particular, because they are watched so regularly by editors, tend to become higher quality and more neutral," Lien wrote in an emailed response to a request for comment.

But not everyone is convinced.

As Wikipedia, founded in 2001, has grown in popularity and credibility, it has become a valuable but contested record of history.

"In many languages, Wikipedia is the main or sometimes only general knowledge repository online," said Taha Yasseri, a senior research fellow at Oxford University's Internet Institute, who has studied Wikipedia.

"Articles that are subject to edit wars can be a common place for misleading the readers," he said, explaining that a reader would not be aware an edit war was happening. "At any given time, the information reflected in the article can only show some part of the truth."

At one point in August, the police page grew by a third as long sections were added criticising their response to demonstrators. The Oct 1 shooting of a protester by police sparked another flurry of changes.

On the police Wiki page, the force's motto was changed from "We Serve with Pride and Care" to "We Serve with Terror and Violence," then to "We Shoot kids point blank", before quickly reverting.

Lam's page received similar bursts of editing, with changes dubbing her "Super Lady," and then "Super Puppet", after she decried a July attack on China's representative office.

Police, who have arrested more than 5,000 protesters since June, have repeatedly defended their behaviour as restrained in the face of demonstrators targeting them with petrol bombs and flaming arrows.

Neither the force nor Lam's office responded to Reuters' questions about their Wikipedia articles. Wikipedia's volunteer editors, though, are bracing for more busy months.

"People naturally will advocate for anything that they strongly believe in," MarkH21 said.

"Thankfully, the editing community has many safeguards against it ... the self-policing mechanism of Wikipedia is that it is built around the idea of consensus."