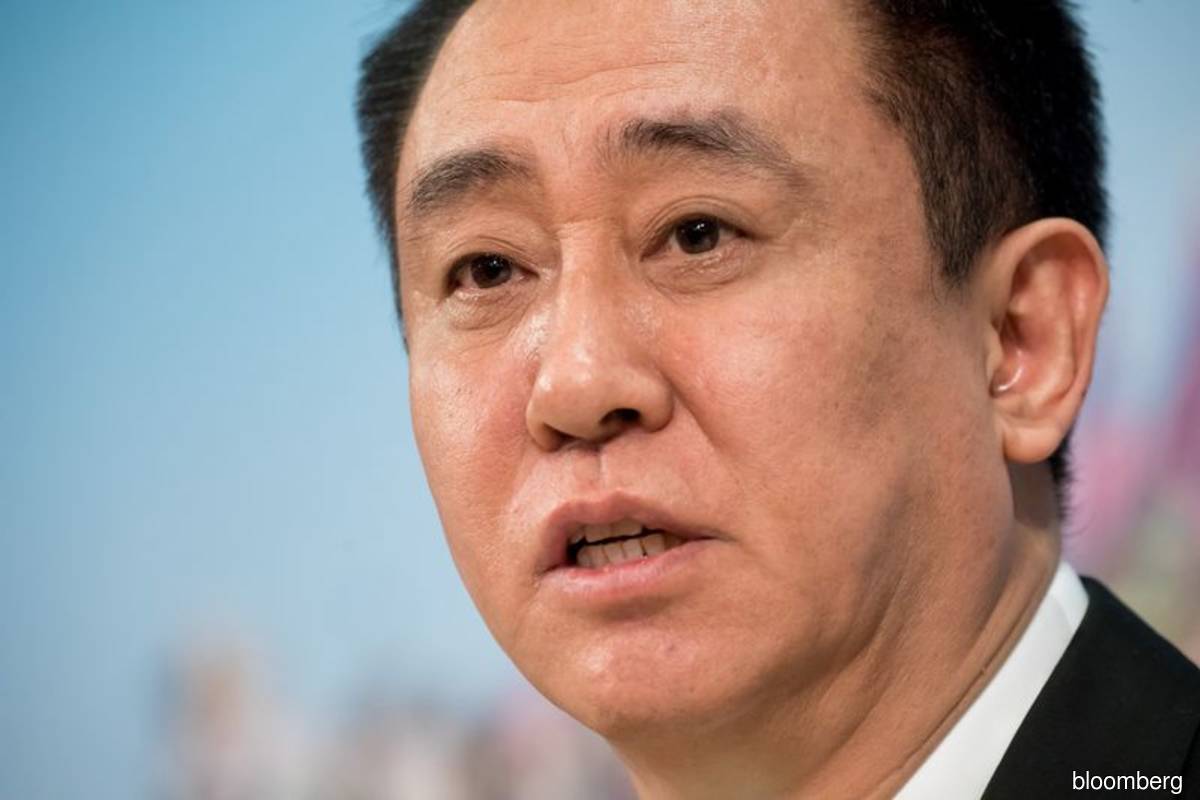 The group now faces at the minimum a debt restructuring, which could be China’s largest ever.

A major bailout would send the wrong message when Xi is trying to rein in billionaires and close the nation’s wealth gap, said Donald Low, director of the Institute for Emerging Market Studies at the Hong Kong University of Science and Technology.

(Oct 11): Four years after vying with Jack Ma for the title of Asia’s richest man, Evergrande chairman Hui Ka Yan’s fortune is plunging and his sprawling real estate empire is on the verge of collapse.

It’s a stunning reversal for a man who fought his way from poverty in rural China to build one of the world’s largest property companies. In previous times of trouble, Hui had been able to rely on the help of his tycoon friends and local government support. This time, with US$305 billion in liabilities and the company’s asset prices plunging, Hui appears more alone than ever.

“There’s no interest to bail him out,” said Desmond Shum, whose book about his dealings with China’s political elites, “Red Roulette,” described how he once went shopping with Hui for a superyacht. “In the situation he’s in now, I don’t think any political connections will come to his rescue.”

What happens to Hui is open to question, including whether he will retain ownership of his empire. One of his allies and fellow billionaire Zhang Jindong lost control of the retail arm of his Suning conglomerate when it received a state-backed bailout in July — partly because he helped Hui out during a tight spot. Other heads of failed companies have met with worse fates, from arrest to execution.

Hui’s empire is turning into one of the biggest victims of President Xi Jinping’s efforts to curb the debt-fueled excesses of conglomerates and defuse risks in the nation’s housing market. Evergrande and its affiliated companies were built through an aggressive mix of dollar debt issuance, share sales, bank loans and shadow financing — funding avenues that have been all but cut off. The group now faces at the minimum a debt restructuring, which could be China’s largest ever.

Even his long-term backers may be losing patience. Chinese Estates Holdings Ltd., controlled by the family of property mogul and fellow poker pal Joseph Lau, has been selling Evergrande stock and said it could unload its entire stake.

Hui remains in charge of the group and was seen publicly at the Communist Party’s 100th anniversary celebration in Tiananmen Square in July, illustrating the power of his political connections. He met with employees last month, and signed a public statement emphasizing the importance of finishing construction of sold properties.

Yet the lack of public support for Hui from Beijing and his tumbling fortune — down US$15 billion this year — is forcing him to intensify efforts to save his empire, such as selling stakes in some of Evergrande’s once-prized assets. This includes reportedly selling a majority holding in its property services unit to another developer controlled by the billionaire Chu family.

Hui has survived plenty of challenges in the past. He was born in Henan province in 1958. After losing his mother as an infant, he was raised by his grandmother and his father, who cut wood for a living. Education provided an escape from poverty. Hui graduated from Wuhan Institute of Science and Technology in 1982, just as Deng Xiaoping was opening up the economy. After working at a steel company, he quit his job in 1992 to try his luck in real estate.

He founded Evergrande in 1996 in the southern city of Guangzhou, and over the next decades built the firm into a colossus that controlled land five times the size of Manhattan. Hui didn’t stop at property, accruing interests in soccer and volleyball teams, bottled water, online entertainment, banking and insurance. He vowed to eclipse Elon Musk with the “most powerful new energy automobile company in the world.”

As the company grew, so did Hui’s wealth. His personal fortune swelled to US$42 billion at its peak in 2017. His majority holding in Evergrande meant he benefited generously from dividends — pocketing US$8 billion alone since 2011, according to Bloomberg calculations.

His companies bought luxurious mansions, including one in Sydney that had to be sold in 2015 after the Australian government found the purchase violated foreign investment rules. He was the only director of a company that owned a US$100 million house in the hills above Hong Kong island, before stepping down recently, according to company registry filings.

Hui made sure he aligned his business with areas that meshed with the priorities of China’s Communist Party leaders, particularly Xi — from making the country a global tech leader to winning the World Cup. He’s a member of the Political Consultative Committee, which helps advise the government on policy. In 2018, he was included on an official list of 100 outstanding entrepreneurs.

Hui touted the millions of jobs the company created and billions of yuan paid as taxes. He also emerged a philanthropist, topping Forbes’s China list for charitable giving.

“Everything in Evergrande, it’s from the party, the country, and society,” Hui said in a speech the same year. “So we should bear social responsibility.” Yet there was increasing concern about the size of the company’s debts, which by 2018 had swelled to more than US$100 billion. That year, China’s central bank singled Evergrande out for having the potential to pose systemic risks to the financial system, along with HNA Group, Tomorrow Holding Co. and Fosun International Ltd. China’s era of conglomerates expanding through aggressive debt-fueled acquisitions was ending.

Hui, pledging to cut his dependency on leverage, turned — as he had often done in the past — to friends and corporate connections to raise money.

His companies notched up some US$3.6 billion of transactions since 2018 with the real estate empires run by three other Chinese magnates — members of the so-called Big Two Club because of their fondness for a poker game of the same name. They include Chinese Estates’ Lau. Among their investments were buying stakes in Hui’s electric car and property services units, as well as an online sales platform.

But regulators kept tightening the screws. Shadow loans — non-bank financing that accounted for almost one-third of Evergrande’s debt in 2019 — dried up, opaque borrowing via joint ventures was scrutinized, and regulators prevented fresh borrowing with its “three red lines” policy to limit leverage.

Such measures helped trigger a liquidity crisis for Hui in 2020. A failed backdoor listing for Evergrande’s mainland unit left it on the hook for as much as US$20 billion in repayments to investors. A leaked letter by Evergrande to the provincial Guangdong government (documents the company said were fabricated) warned that the company faced a potential default that could roil the financial system. Soon after, an agreement to avoid most of the repayments was secured, backed by local officials. Hui stepped back from the brink — but it wasn’t for long.

Disputes with suppliers over unpaid bills started making headlines. Some sought asset freezes, others brought projects to a grinding halt. Local support dwindled, at least publicly, as Xi intensified his crackdown on the real estate sector and pushed ahead with his campaign to create “common prosperity.” Behind the scenes, officials urged Hui to solve his company’s debt problems as quickly as possible.

Hu Xijin, editor in chief of state tabloid Global Times, said in a Weibo post last month that companies such as Evergrande cannot be ‘too big to fail’ once they blow up. “They must have the ability to save themselves through the market,” he said.

A major bailout would send the wrong message when Xi is trying to rein in billionaires and close the nation’s wealth gap, said Donald Low, director of the Institute for Emerging Market Studies at the Hong Kong University of Science and Technology.

“Rescuing Evergrande creates moral hazard, increases the likelihood of more debt binges like Evergrande’s, and perhaps most importantly, undercuts the President’s efforts to promote common prosperity as a bailout would be seen – correctly – as a massive subsidy for the rich,” Low said.

Instead, Hui has been stepping up asset sales to find the cash to repay the company’s many creditors — from retail investors demanding payment on some 40 billion yuan in Evergrande high-yield investment products, to the 1.6 million homebuyers who put deposits on apartments that have yet to be built, as well as bondholders. The company is Asia’s largest issuer of junk bonds. International ratings firms have repeatedly downgraded the company’s debt as concern grew the firm will default.

Evergrande agreed last month to sell part of its holding in a mainland bank to the local government in a deal that S&P Global Ratings said marked the first step toward solving the company’s liquidity crisis. Evergrande also negotiated the sale of a 51% stake in its property services unit to Hopson Development Holdings Ltd., Cailian reported Oct. 4.

“If they can sell this unit successfully, it will help to repay short-term debts but it will also limit the future growth of the company,” said Kenny Ng, a strategist at Everbright Sun Hung Kai Co.

Pressure is mounting. Evergrande hasn’t given any indication that it paid two recent dollar bond coupons, despite financial regulators encouraging the company to take all measures possible to avoid a near-term default on dollar bonds. It’s missed interest payments to at least two of its largest bank creditors. The company’s shares — which are currently suspended — are down 80% this year, while its dollar bonds are at record lows.

Contagion meanwhile is spreading to other parts of the property sector, prompting rising default risks as weaker developers struggle to meet upcoming obligations. The nation’s dollar junk bond yields have surged to their highest in about a decade.

As Hui looks increasingly isolated, time will tell if the billionaire can find his way out of his current challenge. Even if he does, his empire is likely to look very different, as Xi pursues his ambitious plans to remodel China’s economy.

A shrinking workforce means “China must rely exclusively on productivity for economic growth,” said Alejandra Grindal, chief economist at Ned Davis Research. “An overleveraged and unproductive real estate company, such as Evergrande, is not conducive to a productive outlook.”