Housing industry blueprint in the works 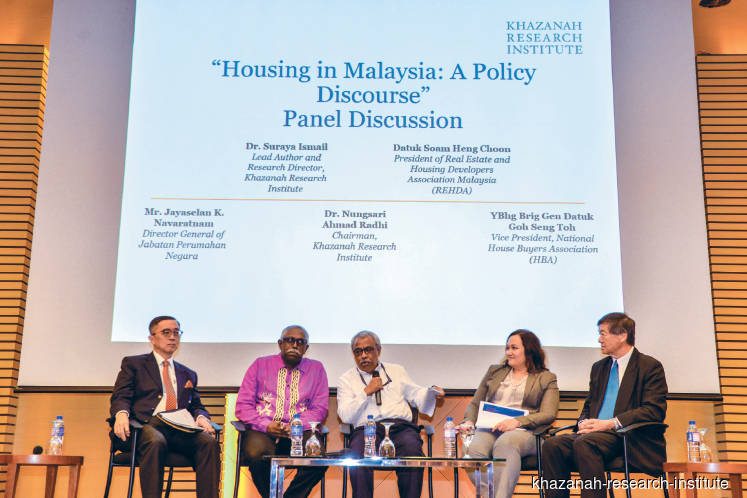 The Ministry of Housing and Local Government is drawing up a national blueprint for the property industry, said National Housing Department director-general Jayaselan Navaratnam.

Speaking to City & Country on the sidelines after the launch of Khazanah Research Institute’s (KRI) “Rethinking housing: Between state, market and society” report on April 25, he noted that there is a need for such a blueprint as currently, every state has its own policies on matters relating to the industry. “It will provide the states with the guidelines so that they can work within the framework … there will be standardisation. What we need to do is, get all the states to agree. It is a major task, so it won’t come in immediately. It could take five years and we are not sure if it will be an Act or a policy,” he said.

He added that his department is currently studying three laws relating to commercial,  residential tenancy and wakaf land as well as looking to amend the Housing Development (Control and Licensing) Act 1966.

KRI launched the report at an event called “Housing in Malaysia: A policy discourse” in Kuala Lumpur. The report was prepared as a background research for the formulation of the National Housing Policy (2018-2025), which provides a comprehensive overview of the country’s housing sector.

The report states that housing affordability has deteriorated, evidenced by the rise of the median multiple affordability from 4 to 5.1 between 2012 and 2014. The median house price also increased at a compound annual growth rate (CAGR) of 23.5% from RM175,000 to RM280,000, while the median household income grew significantly slower at a CAGR of 11.7%.

It adds that households have moved further away from urban centres in search for lower-priced homes, compromising on travelling cost and time for work and access to amenities. In addressing the issue of affordability, it says house prices should not be seen in isolation but together with sectoral forces such as transport.

“The emergence of the phenomenon where households live further away from job opportunities signals potential complications as affordability and accessibility would inevitably be linked to housing locations. This further raises the need for interstate coordination,” the report says.

During the panel discussion, Soam said there had been a steady supply of affordable homes due to a regulation imposed on developers. Generally, issues faced by developers included the rising costs of materials and cost of doing business as well as premium and development charges imposed by state governments. “For example, a developer buys a piece of land [in Kuala Lumpur] at a very high cost. When it submits the building plan, DBKL will impose a development charge of, say, RM24 million. This translates into RM30 per plot ratio, or over RM300 psf. Is this reasonable?”

Nevertheless, Goh said, some developers are “having the teh tarik syndrome”. For example, when steel prices go up by 10%, house prices also rise 10% when the house is built with various other materials.

Goh proposed a housing price control mechanism — similar to that for essential household items — to tackle the problem. “We are very stringent in controlling the prices of cooking oil, rice and sugar, but in the housing sector, we have allowed the developers to call the shots — how much they want to sell a house or how much profit they want to make. To the House Buyers Association, a house is more critical than cooking oil or sugar — you need a shelter over your head.”

However, Nungsari disagreed with Goh’s proposal. “If you have a housing price control mechanism, it will bring forth a floor price and developers will not sell anything below this price. This will distort supply.”

The “Rethinking housing: Between state, market and society” report observes that there is a need to modernise the construction and real estate sectors so they can be more responsive to people’s needs. House prices can be made more affordable by embracing technology and innovation, it says.

It also says there was little change in the skill composition of the residential construction subsector from 2010 to 2015 despite improvements shown by labour productivity indicators. “Measures to induce structural change in the industry have not been effective. This reinforces the need for the housing delivery ecosystem to support technological upgrading through a consolidation of the supply chain via a new procurement route that enables technology absorption and a shift from the sell-then-build system to the build-then-sell system, which motivates productivity and innovation.”