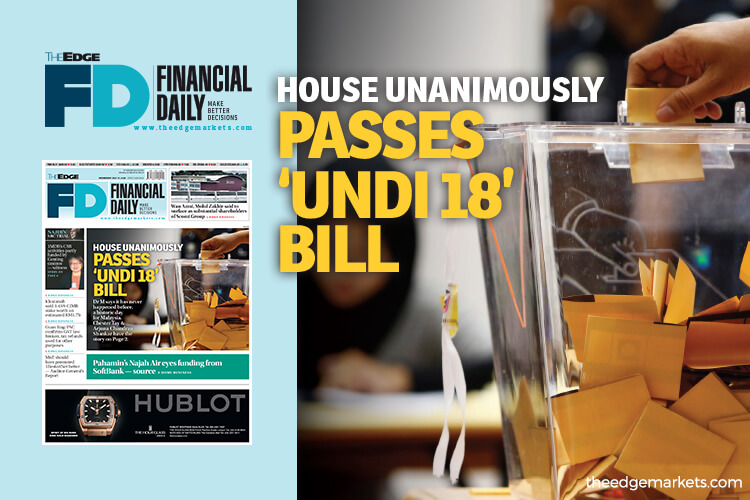 KUALA LUMPUR: History was created in the Dewan Rakyat yesterday as lawmakers from both sides of the divide unanimously supported a constitutional amendment bill that paves the way for 18-year-old Malaysians to vote and stand as candidates in elections.

All 211 members of parliament (MPs) present in the House voted in favour of the bill through a block vote, said Speaker Datuk Mohamad Ariff Md Yusof, adding that no MP opposed the bill or abstained from voting.

For amendments to the Federal Constitution, a two-thirds majority is required, meaning that only 148 votes (Dewan Rakyat has a total of 222 members) were needed for the bill to be passed.

“This is indeed a historic day for Malaysia,” Prime Minister Tun Dr Mahathir Mohamad told reporters later yesterday, referring to the total support for the bill.

“It has never happened before. I have been in this Parliament for a long time, but this was the first time an amendment was passed with full support from all MPs. Not even one of them objected to it. This was far higher than the two-thirds majority that we needed,” he said.

Dr Mahathir said the outcome reflected the maturity of Malaysians.

“Firstly, when there was a change of government, there was no riot or violence of any kind; the transition was very smooth. And this time, for the first time in history, we have achieved bipartisanship, a total bipartisanship. This is an achievement by the people of Malaysia in their choices of representatives,” he said.

He said about 7.8 million new voters are expected to be entered into the electoral rolls by 2023. This will raise by more than 50% to 22.7 million the total number of voters that year, up from the 14.9 million in the 14th general election last year.

Dr Mahathir said the government thanked the opposition for fulfilling their promise to support the amendment.

“We believe they will be able to decide for the country through the ballot paper, and lead the country as candidates,” he said.

More than 60 MPs spoke during the debate on the bill, which went on for six hours, after the prime minister tabled it for second reading.

Winding up the debate on the bill in the Dewan Rakyat earlier yesterday, Dr Mahathir said the automatic registration of 18-year-old citizens following the amendment will also cover 21-year-old youths who have not registered as voters.

The matter would be given priority by the Election Commission in the implementation of automatic registration of voters, Bernama quoted him as saying.

He was responding to Ismail, who requested confirmation from the government that 3.9 million Malaysians aged 21 years and eligible to vote — who had not been registered as voters — would be registered automatically after the amendment was approved.

“We are aware that among those who had attained the voting age (21 years old), but who had not been registered previously, would also be registered automatically,” said Dr Mahathir.

He said implementing agencies involved directly in automatic registration should be given the opportunity and space to make proper preparations, for example in terms of data integration among the National Registration Department, Prisons Department, health ministry, police, armed forces and other related agencies.

Dr Mahathir said the government does not intend to compel voters to go out and vote during elections but instead would boost efforts to raise their awareness.

The Institute for Democracy and Economic Affairs said allowing Malaysians to vote from the age of 18 brings the country in line with neighbouring countries such as Indonesia, the Philippines and Thailand.

“This is a historic day for Malaysia; this amendment will present young Malaysians with the opportunity to participate in an essential and most basic component of a democracy, which is to cast their vote for the leader of their choice,” said Aira Azhari, a senior executive in democracy and governance at the think tank.

“Moreover, the amendment also entails that 18-year-olds are now eligible to be nominated as candidates for elections — paving the way for our talented youth to chart the country’s future as leaders. This is an extremely positive development in our efforts to become an increasingly mature democracy,” Aira said in a statement.