The bar counter, of cast concrete, demarcates the kitchen from the dining and living area, where guests and business partners are entertained. Behind the stove and bar counter (left) is a beautiful showcase made up of wooden cubes displaying WorldFoods products. 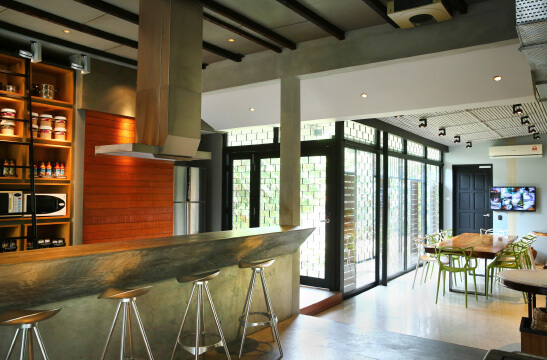 The kitchen overlooks the dining space, which doubles as a meeting and presentation area. The original sliding door grills were kept, adding to the retro modern feel of the décor whilst providing a connection with the greenery outside. 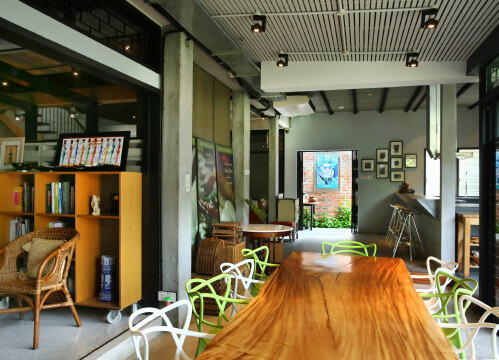 The layout is open and fluid, resulting in a breezy and cheery atmosphere. The natural finish of the dining table highlights the gorgeous whirly wood grain and creates a nice juxtaposition with the terrazzo floor and modern sculpted chairs in zesty green and fresh white.

When business is about food, a beautiful working kitchen becomes the office centrepiece

A change of scenery can do wonders for people. For small, home-grown food company WorldFoods, the ideal setting was a space with a working kitchen in which to test out new recipes and ideas. Converting a house into a home office enabled the two founding business partners to dictate how the space would look and be used, the décor stamped with their personality. They wanted a smaller, less conventional office space, enhanced with more comfortable surroundings, much in line with the bottled sauces they create.

They took over a house that was built in 1961, maintaining much of the original structure, with most of the renovation work within. It has been three years since they moved in and the calm ambience has proved to have positive effects on the development of the business and the brand.

Calling their office design “retro modern”, the kitchen is of course the centrepiece of their setup.

The original kitchen was smaller in size so walls were knocked down to expand the area, making room for a bar counter and a sizeable pantry at the back for storage. The outdoor patio, which is next to the kitchen, was also extended while the sliding door grills were maintained — an original detail from the old house.

A charming feature the partners kept was the parquet and terrazzo flooring, which is not in much use anymore due to its high cost. The decision to maintain the original structure was also based on the fact that the construction is much sturdier compared with newer mass-developed housing. They took the smarter route, simply updating what was already there. For example, the flat terrazzo flooring has been cut into slabs and rearranged with pebbles in between for a more contemporary aesthetic.

Aside from the flooring, vintage elements, such as the old oven, still remain. Behind the stove and bar counter are wooden cubed sections that were constructed to proudly display their range of products. Cement boards were added to the beams that form the ceiling of the kitchen and fitted with downlights, adding to its retro modern aesthetic. To further highlight the business’ emphasis on food and flavour, several quirky photographs captured by a Chinese photographer hang on the wall to the left of the kitchen depicting adults and children in China casually eating.

The use of earth and grey tones helps to create a relaxed and cheery atmosphere that highlights the kitchen’s best features. The fluid layout sees the kitchen open to the dining or meeting area on its right, where there is a long wooden banquet table. The wood details, such as the cubed sections and furniture provide, a softening contrast against the cement bar counter and terrazzo flooring, which really warm up the space.

The overall décor strikes a fine balance between the retro details and modern elements, with a fabulous kitchen setup for research and delicious development.