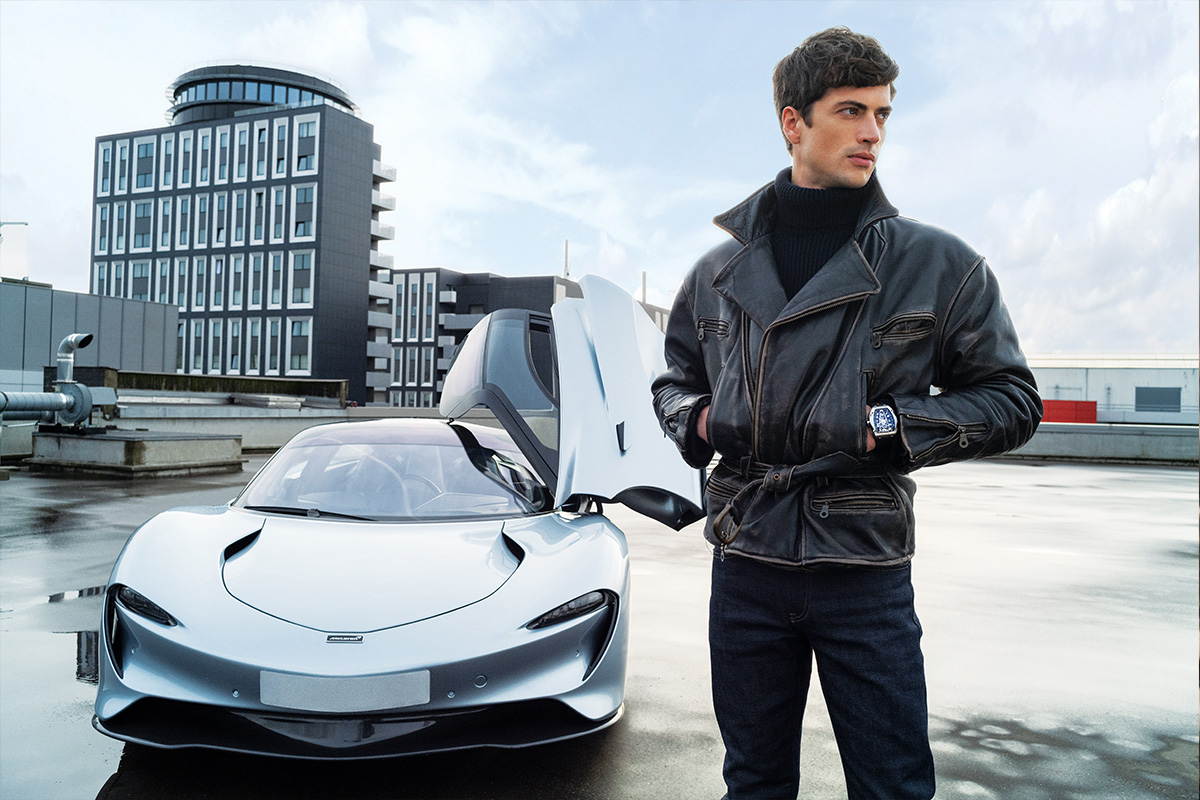 For Richard Mille, a future that involved British racing company McLaren was all but written in the stars. A lifelong automobile enthusiast, his passion dates back to 1966 — he was 15 years old and had accompanied his father to the Monaco Grand Prix, where he saw Bruce McLaren driving his M2B, the very first McLaren Formula 1 car. Mille recalls vividly the obnoxious growling of the car’s Ford engine, which was actually intended to power the McLaren Can-Am car in the Indianapolis 500. This cherished memory, in part, instilled his deep-seated passion for the carmaker and eventually led him to establish a long-term partnership with McLaren in 2016 with the watch brand that carries his name. The first watch to emerge from the pairing was the RM 50-03 Tourbillon Split-Seconds Chronograph, developed with McLaren Racing. Produced in a limited edition of just 75 pieces, it remains the lightest split-seconds tourbillon chronograph in the world. The following year, the watch development partnership was extended to embrace McLaren Automotive, the arm of the McLaren Group launched in 2010 to focus specifically on producing sublime road cars developed using the skills, knowledge and technology used in its F1 programme. This resulted in the RM 11-03 Automatic Flyback Chronograph, unveiled at the 2018 Geneva Motor Show simultaneously with the 211mph McLaren Senna.

The watch was limited to just 500 pieces and paid tribute to the car in several ways — its use of similarly exotic materials and subtle design elements such as push pieces based on the Ultimate Series car’s headlamps, a winding crown in the pattern of the marque’s wheel and a strap incorporating the McLaren Speedmark logo.

The most recent release born from this union is the RM 40-01 Automatic Tourbillon McLaren Speedtail, inspired by the British racing maison’s fastest car ever built. First unveiled in 2018, the Speedtail’s silhouette resembles that of a single water droplet, the most aerodynamically efficient shape found in nature and the one used as the starting point for what has become the ultimate streamlined grand tourer. The scientifically developed wind-cheating enhancements — air intakes at the side of the headlamps, for example, and a pair of flexible, rear-mounted ailerons — enable its 1,055-horsepower hybrid powertrain to push the all-carbon car to the top speed of 402kph. For comparison, the MCL35 that Lando Norris and Daniel Ricciardo are currently driving in this year’s F1 season tops at 349kph.

I use the word “union” because both watchmaker and carmaker draw inspiration from each other. “Even in our early discussions, it was agreed that the case should take the same teardrop form as the car when seen from a bird’s-eye view. The result is a watch that not only looks as spectacular as the Speedtail, but one that is also wonderful to use,” says Rob Melville, design director of McLaren Automotive. “When we made the Speedtail, we set out to produce a car that had an art quality to it. And just as the car inspired the watch, so Richard Mille’s use of materials has inspired us — although McLaren was a carbon-fibre pioneer, the Carbon TPT that Richard Mille has the proprietary use of in watchmaking was a version of the product that we had never seen or tried to use before. Having been introduced to it by Richard Mille, we decided to incorporate it into the Speedtail.”

Richard Mille’s engineers, led by casing technical director Julien Boillat, were able to come up with a prototype for the RM 40-01 Automatic Tourbillon McLaren Speedtail as early as February 2019, but they would produce four more before arriving at the final version. “Although we knew immediately that we wanted to take inspiration from the extraordinary teardrop shape of the car, the process was a great deal more complicated than just trying to follow its lines because it was essential to seamlessly combine existing Richard Mille codes with those of McLaren and to reflect Melville’s design and ideas,” says Boillat. The architecture of the new 603-part CRMT4 took a total of 8,600 hours to realise, that is, around 6,000 hours of construction and 2,600 hours of prototyping, testing and refining

Marking a departure from the ultra-light sporty versions that previously came out of the Mille-McLaren partnership, this new watch closely follows the ethos of the car that inspires it. Personally, I was rather glad to see Richard Mille give up its increasingly predictable high-performance philosophy in favour of something more luxurious. It may be some time yet before I am able to admire this timepiece from the palm of my hand but as a bit of a petrolhead, I am definitely a fan of the way it mirrors a car quite so poetically.

I can already imagine how the tonneau case would feel against my wrist, its shape extensively reworked to reference its namesake hypercar — the teardrop shape, most evidently, while the notched bezel matches the car’s hood-mounted air intakes, and the carbon TPT pushers at 4 and 8 o’clock represent the air vents in front of the wheels. Richard Mille’s design team spent over 2,800 hours creating the shape of this 69-piece case, with the triple-contour sapphire crystal costing more than what would be found in any other Richard Mille watch, owing to its shape and decreasing thickness. For all the effort put into the case, though, its water resistance is a mere 50m — this watch is definitely less beach, more boardroom.

The interior of the watch match its magnificent exterior, the multiple layers of the skeleton dial drawing the eye with their irresistible complexity. There is a lot to love about the internal organs of this watch, beginning with numerals that are not applied but milled from the surrounding black PVD bridges. The big date display at 12 o’clock serves as a visual anchor, balanced by the power reserve indicator at 9 o’clock, the crown function selector at 3 o’clock and the tourbillon at 6 o’clock, which is somewhat hidden by an extensive cage. An interesting stylistic choice, even if I do miss being able to watch the tourbillon stage its hypnotic dance. And, as a neat finishing touch that further ties car and watch together, the orange line running from the lower part of the movement and on to the strap came from the vertical stoplight mounted in the Speedtail’s rear screen.

Just like the case of the RM 40-01 conveys the shape and spirit of the Speedtail, it was also essential to reflect the technology and performance of the car’s powertrain in the movement of the watch. It was the job of Salvador Arbona, technical director for movements, to interpret the car’s philosophy in the form of a new and remarkable 603-part mechanism — the CRMT4. Based on an existing in-house automatic calibre, it introduces the first in-house power-reserve display powered by a planetary differential, combined with an oversize date and a function-selector complication. It is a combination that has never before appeared on a Richard Mille in-house automatic tourbillon, a fact that necessitated the design of an entirely new movement architecture — a process that took a total of 8,600 hours, that is, around 6,000 hours of construction and 2,600 hours of prototyping, testing and refining.

The beauty of the McLaren-Mille partnership lies in the way both maisons push back each other’s boundaries and inspire new, complex ideas. The RM 40-01 Automatic Tourbillon McLaren Speedtail is evidence of this shared genius, and we look forward to seeing other ways in which the creativity and ingenuity of this partnership can be showcased.