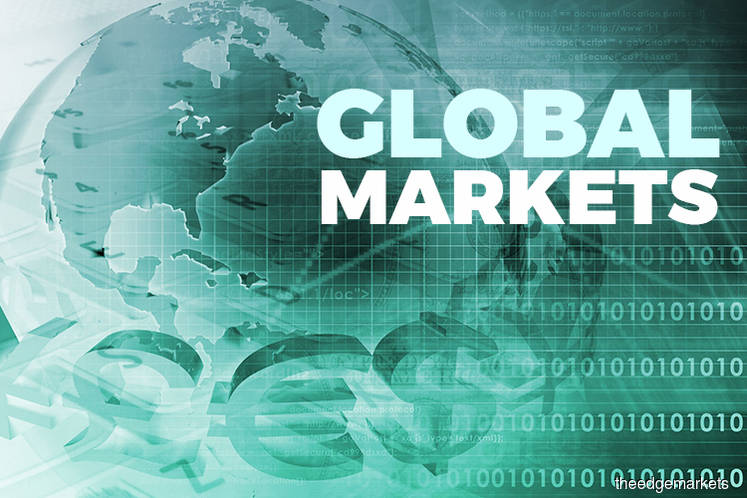 NEW YORK (April 8): World stock markets rose on Tuesday led by gains in Europe and Asia as signs of progress in curbing the spread of the novel coronavirus fueled investors' appetite for risk, though a steep, late sell-off on Wall Street erased gains in U.S. stocks.

Oil prices ended the day deep in the red as hopes of a deal to decrease supply turned into uncertainty and a surge in crude and gasoline stockpiles dragged prices down further.

The euro jumped against the greenback after six sessions of declines.

New York state, the U.S. epicenter of COVID-19, is nearing a plateau in number of patients hospitalized, Governor Andrew Cuomo said, a hopeful sign even as deaths in his state and neighboring New Jersey hit single-day highs.

Worldwide, the novel coronavirus has infected more than 1.3 million people and killed over 74,000, and although the numbers are still rising in many highly populated countries, some tentative improvements have given hope.

"The rally is sentimental and a little premature because if we lift these lockdown measures too soon and try to resume economic activity, we're going to get a very severe pandemic rebound," said Indranil Ghosh, chief executive officer of Tiger Hill Capital in London.

The comment echoed that of the World Health Organization, which warned earlier on Tuesday against easing coronavirus measures too early.

The S&P closed near its lows of the session, giving up an earlier gain of as much as 3.5%.

Japan's Nikkei posted a 2% gain overnight as its government promised a near-$1 trillion stimulus package - equal to a fifth of its gross domestic product.

With market optimism on the rise, the U.S. dollar dropped and riskier currencies outperformed as risk appetite improved on hopes that lockdowns may be slowing the spread of the coronavirus in some countries.

Action by central banks to ease a scramble for dollars has also helped bring some calm to markets, with massive U.S. stimulus programs and debt issuance seen weighing on the greenback.

"We've got a nice decline in volatility across forex and equity markets," said Kenneth Broux, FX strategist at Societe Generale.

"We know central banks have done a very good job in alleviating the strain in dollar markets and that's feeding through."

Oil prices gave up early gains to fall sharply as hopes that the world's biggest producers would agree to cut output were overtaken by anxiety that a deal would not emerge. Data showing crude stockpiles surged by much more than expected further weighed on prices.