Lifestyle
From The Edge
Scene

ONE hundred years after the mass killing of Armenians, a Chicago artist has created a monumental painting to honour the victims and celebrate a culture that nearly vanished.

The 1915 massacre of Armenians by Ottoman troops became a defining element of Armenian national identity.

Seeking to promote awareness of the tragedy and Armenian culture, Chicago-based artist Jackie Kazarian embarked on a painting of enormous scale in an endeavour called Project 1915.

The painting, which Kazarian has titled Armenia (Hayastan), will be displayed for the first time in Chicago’s Mana Contemporary gallery from April 17 to May 29.

The work is a semi-abstract landscape splashed with bold images and text from ancient Armenian maps and church architecture, united by a pattern of needle lace by Kazarian’s Armenian-born grandmother, and with colours and symbols from illuminated manuscripts.

Kazarian, who has Armenian roots, drew on Pablo Picasso’s epic painting Guernica, which depicts the horror of a northern Spanish village’s bombing during Spain’s civil war, for her painting. It is the same size as Guernica at 3.5m by 7.9m.

“No one would have known what happened in Guernica if it wasn’t for that painting,” Kazarian said.

The nature and scale of the killings of Armenians by Ottoman forces during WWI remain highly contentious.

While a number of countries define the massacres as genocide and while Turkey accepts that many Armenians died in partisan fighting, the Turkish government denies that up to 1.5 million were killed and that it was an act of genocide.

Last year, Turkish Prime Minister Tayyip Erdogan made unprecedented condolences to the grandchildren of Armenians killed at the time, but the legacy remains an obstacle to reviving frozen relations between Turkey and neighbouring Armenia, a small former Soviet territory.

In Kazarian’s painting, two open hands span the bottom corners, as if holding up the work and an entire culture. It is a gesture Kazarian said she remembered her grandmother often using.

“This is a very visceral, emotional project. But like any art that references a painful past, it is about remembering, healing and educating ourselves to make a better world,” Kazarian said.

After its Chicago exhibition, the painting will be displayed at universities and galleries across the United States and the world. — Reuters 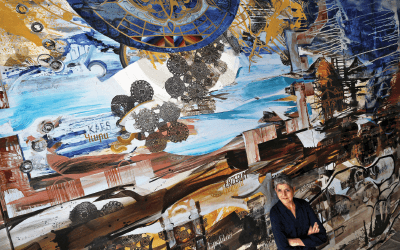