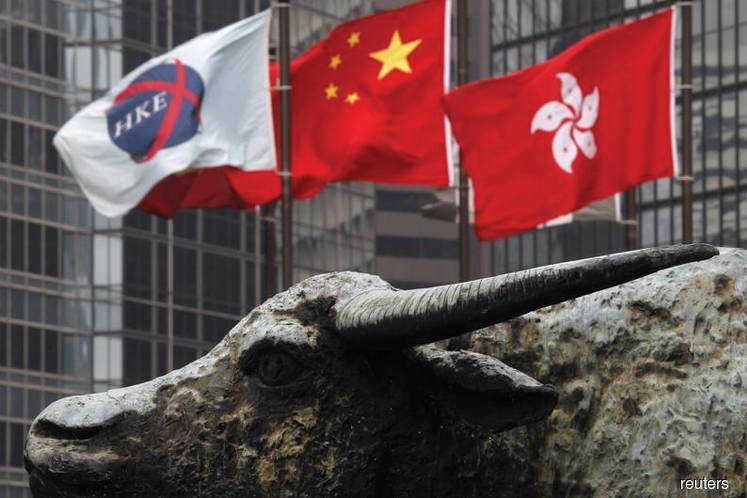 SHANGHAI (Nov 13): Hong Kong stocks dropped nearly 2% on Wednesday, led by declines in property shares, as protests spread across the city. Risk appetite was also curbed by fears that US-China trade talks are not making progress.

Anti-government protesters paralysed parts of the Asian financial hub for a third day, after the city's embattled leader, Carrie Lam, said protesters trying to paralyse the city were being "extremely selfish".

Chinese state media condemned the violence, with the China Daily newspaper stating that young protesters were revelling in a "hormone-fuelled 'rebellion'".

The market is also clouded by uncertainty around the Sino-US trade talks. US President Donald Trump said a trade deal was "close" but gave no new details on when or where an agreement would be signed, disappointing investors in what was billed as a major speech on his administration's economic policies.

The sub-index of the Hang Seng tracking energy shares dipped 1.9%, while the IT sector dipped 0.82%, the financial sector ended 1.88% lower and the property sector dipped 2.52%.

The top gainer on the Hang Seng was Sino Biopharmaceutical Ltd, which gained 0.89%, while the biggest loser was New World Development Co Ltd, which fell 4.91%.

Around the region, MSCI's Asia ex-Japan stock index was weaker by 1.06%, while Japan's Nikkei index closed down 0.85%.

The top gainers among H-shares were China Resources Beer Holdings Co Ltd up 1.37%, followed by China Gas Holdings Ltd, gaining 0.87% and Guangdong Investment Ltd, up by %.

The three biggest H-shares percentage decliners were Geely Automobile Holdings Ltd, which was down 3.82%, China Railway Group Ltd, which fell 2.92% and China Pacific Insurance Group Co Ltd, down by 2.81%.