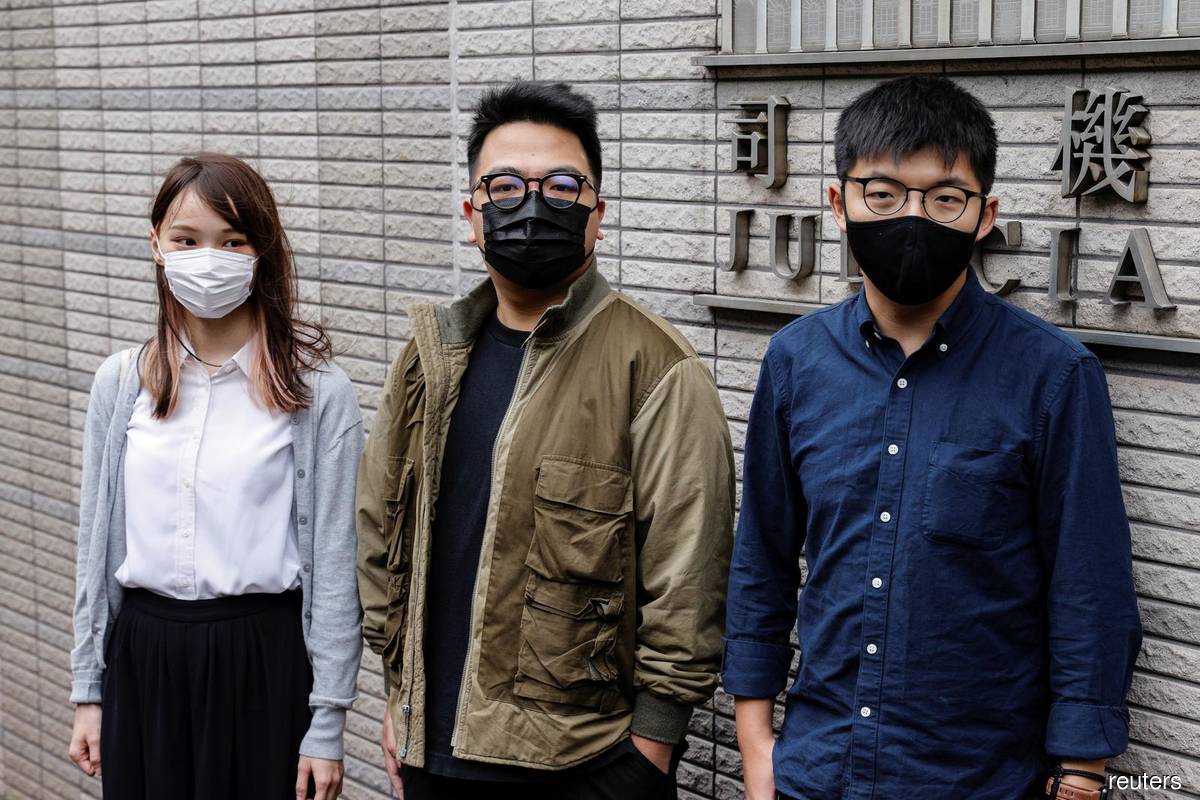 Wong, who was just 17 years old when he became the face of the 2014 student-led Umbrella Movement democracy protests, faces a maximum three-year jail term. The sentence will be delivered by Dec 2 at 2.30pm.

Before being taken away by security staff, Wong shouted "Everyone hang in there! Add oil" in the courtroom, using a popular Cantonese expression of encouragement often used during protests.

On Twitter afterwards, Wong said attention should be directed to the 12 Hong Kong people detained virtually incommunicado in China after being arrested at sea in August as they were attempting to flee by boat to Taiwan to escape charges related to last year's protests in the city.

"I wish to pay tributes to our fellow activists who are about to face trials and prison, or... [are] in distress for not being able to return home: We're not fearless, but you are the braver ones," he said.

"What we are doing now is to explain the value of freedom to the world," Wong added. "I'm still learning to conquer the fear and I believe you are with me along this journey."

Wong did not plead guilty to a third charge of knowingly participating in an unauthorised assembly after the prosecution offered no evidence for it.

His long-time activist colleagues Agnes Chow and Ivan Lam, who also pleaded guilty for similar charges, were remanded in custody at the same trial.

Wong was not a leading figure in last year's pro-democracy and anti-China protests, but his continued activism has drawn the wrath of Beijing, which sees him as a "black hand" of foreign forces.

He disbanded his pro-democracy group Demosisto in June, just hours after China's parliament passed a sweeping national security law for Hong Kong, punishing anything Beijing considers to be subversion, secessionism, terrorism, and collusion with foreign forces, with up to life in prison.

Wong also faces charges of participating in an unauthorised assembly in October 2019 and on June 4, 2020 over a vigil commemorating the crackdown on protesters in and around Beijing's Tiananmen Square in 1989.

Earlier this year, Wong was disqualified along 11 other pro-democracy politicians and activists from running in a since-postponed election for the city's legislature.

Wong spent five weeks in jail last year for contempt of court, before being released on June 16 when protests were already in full swing.

Wong's and other activists' repeated arrests have drawn criticism from Western governments who said China is not fulfilling its obligation to allow Hong Kong a high degree of autonomy, agreed with former colonial master Britain when the city returned to Chinese rule in 1997.

China denies the accusation and said Hong Kong is its internal affair.