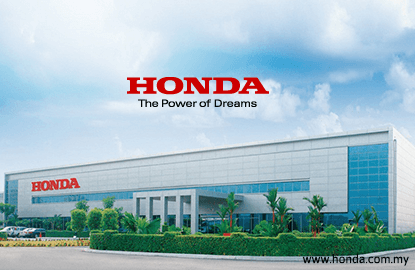 PETALING JAYA (Feb 1): Honda Malaysia is offering advance bookings for its new Honda City model prior to its launch in the first quarter of this year.

“Bookings for the new City are now being accepted at all 88 Honda authorised dealers nationwide,” Honda said in a statement today.

The new model is expected to raise the benchmark in the B-segment, in which it is a proven market leader with more than 100,000 units of it previous model sold since its launch in March 2014, the carmaker said.

The fourth generation of the City model is powered by Honda’s signature 1.5 litre i-VTEC engine and its Earth Dreams Technology Continuous Variable Transmission (CVT) for a balance of fuel efficiency and driving performance.

“VSA stabilises the new City by reducing under or oversteering when driving in unexpected situations or during tight cornering. HSA helps to prevent the vehicle from rolling backwards when the brakes are released on an incline while ESS makes the rear brake lights and hazard lights flash automatically to warn nearby cars when the vehicle detects sudden braking,” the carmaker said.

Meanwhile, dual tone alloy wheels are set to elevate the model’s sleek design while its trunk space of 536 litres remains the biggest in its class.

Additionally, all variants of the new City will be equipped with the push start button and smart entry to provide extra convenience to customers.