THE strengthening of the US dollar, from RM3.15 in August to RM3.36 now, is good news for furniture exporters, among them Homeritz Corp Bhd.

“The stronger dollar is working to our benefit as it improves our margins. With the currency’s appreciation and growing sales from key markets, it is the right time to expand the group’s business,” says Tee Hwee Ing, executive director of the Muar-based furniture maker, in an interview with The Edge.

While the company buys its leather — the essential component of its upholstered furniture line — in USD, a sizeable portion of its total cost components, including foam, wood and labour, are procured in local currency. Hence, there is a net positive impact on its margins from its exports in USD.

Notably, net profit margin expanded substantially to 15.9% from 13.4% in FY2013, thanks to manufacturing efficiency as well as greater economies of scale.

Homeritz continues to see strong orders from its main export market, which is Asia-Pacific, including Australia. It has also seen an uptick in demand from Europe this year, which was once its main export destination before the region’s  economic slowdown in 2011.

Homeritz counts both wholesalers and retailers as customers that range from individual storeowners to a chain of department stores. The buyers can opt to sell the products under Homeritz’s own Eritz brand or use their own.

Many of its furniture products are upholstered and cater for more discerning customers in the high-end segment. The furniture maker sources leather and steel from overseas, and procures other raw materials such as foam and wood locally.

Homeritz operates primarily in the higher-margin, original design manufacturing (ODM) segment. It offers different specifications for its furniture, tailored to each client’s preferences.

To save costs as well as to ensure that stocks are cleared, Homeritz engages in short-term order contracts with its clients, whereby delivery takes place between 30 and 60 days after an order is placed. The company has to replenish its orders regularly to ensure a steady stream of sales.

Tee says short-term orders are not a problem for Homeritz, which has been operating on this model for more than 10 years, and successfully established close ties with repeat customers.

Apart from stronger cash flow, another advantage of short-term orders is that pricing is quoted on a per order basis, giving Homeritz the flexibility to better account for fluctuations in raw material prices.

The company plans to spend RM10 million on expansion within the next three years, which could entail the construction of a new factory on a piece of vacant land in Muar that it owns.

“The planned expansion will ramp up the group’s production capacity by 15%. We have been fairly conservative in the past but now we are looking for the right time [to start expanding],” says Tee.

The completion of the new plant will increase capacity by 15%, which will enable the company to meet a much higher revenue target of RM182 million. At present, the plant utilisation rate stands at 80%.

Nevertheless, while Homeritz has been able to increase its manufacturing efficiency and enjoy higher margins than most of its peers, there are some variables that keep the management on its toes.

For example, furniture sales in any particular country are directly influenced by economic growth as well as consumer buying power, which means fewer purchases during lean times.

Design trends and buying habits also tend to change over time, which forces manufacturers to come up with new products while at the same time, maintaining their cost structure. 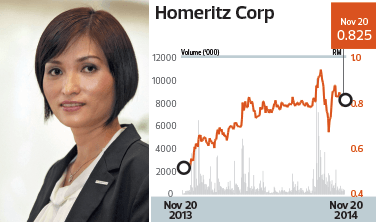 Tee remains positive about the furniture industry’s prospects as a whole. Homeritz, she adds, has established a reputation for building quality products and an ability to deliver.

“Our long-term customers have remained confident with our offerings, and their recommendations have even helped us secure new clients. There is room for more growth for the industry as well as within the group itself,” she says.

Based on its closing price of 82.5 sen on Nov 20, giving the company a market capitalisation of RM165 million, the stock has an earnings multiple of 8.17 times while its trailing 12-month dividend yield stands at 5.93%. Return on equity (ROE) has remained consistently high, averaging 20.93% over the past four years.

Homeritz has paid out dividends amounting to more than 40% of net income in each of the previous four financial years, making the stock viable for long-term investment.

Insider Asia picked Homeritz as the stock of the day on Nov 20.