Home-grown ISEC lists on Catalist board

STARTING OUT over 10 years ago with just four doctors in Kuala Lumpur, ISEC Healthcare Ltd will now be debuting on the Singapore Exchange’s (SGX) Catalist board to raise S$19.6 million (RM50.35 million).

ISEC, which stands for International Specialist Eye Centre, is raising capital to fund its Asia-Pacific expansion, both organically and via mergers and acquisitions.

“One of the key ways for us to grow is via mergers and acquisitions. There are quite a few similar groups like ISEC in Southeast Asia, India and China,” says CEO Dr Wong Jun Shyan in a recent interview with The Edge.

In fact, ISEC already has its eye on practices in Indonesia, the Philippines, Myanmar, Taiwan and China.

Wong explains that the listing in Singapore on Oct 28 will raise ISEC’s profile and make it more attractive to similar practices, which will help the group to expand. Given its cash-rich position, ISEC is tapping the capital markets not just to raise funds but also to elevate its international profile.

The group, which has its roots in Malaysia, has one medical centre in Kuala Lumpur, one in Penang and another two in Singapore. The centres are staffed by a total of 19 specialist ophthalmologists. 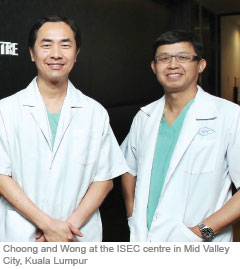 “In Malaysia, I believe there is still potential in the urban centres, like Malacca and Johor. We are also looking at East Malaysia — Kuching and Kota Kinabalu,” says Wong.

Wong, who declines to give any growth target, says that if the last three years are any indication, ISEC has been growing at a compound annual growth rate of 10% to 15%.

Growth drivers for the group are an ageing population, growing affluence, as well as increasing awareness of health issues, he adds.

This is when age-related eye illnesses such as cataract and glaucoma start to set in.

Another growth driver is health tourism. Currently, about 25% to 30% of ISEC’s cases are from overseas.

“Our strategy is not to have a lot of small centres. We are focusing on value-added, more complex eye surgery which we call ‘tertiary care’. We are concentrating on urban centres where patients can be referred to for complex surgeries.”

ISEC models itself as ambulatory centres, where patients are treated on an outpatient basis, as is common with eye surgeries. This eliminates the need for patients to stay overnight, thus reducing the cost of beds and hiring on-call staff. According to Wong, it keeps ISEC’s service costs lower than comparative surgeries in general hospitals.

“As a rule, the cost of an operation is about 20% cheaper than the same procedure in a private hospital,” adds ISEC executive officer Dr Choong Yee Fong, who was also present at the interview.

ISEC will be listed on the SGX’s Catalist market on Tuesday to raise S$19.6 million (RM50.35 million).

This is a relatively small placement and has been oversubscribed, says Wong.

He adds that the initial public offering (IPO) was made deliberately small because ISEC wanted control to remain with the doctors.

On listing, ISEC will have a market capitalisation of S$128.38 million, which is equivalent to approximately RM330 million.

According to its prospectus, S$13.8 million or 70.4% of the IPO proceeds will be utilised for its expansion in Asia-Pacific.

Of the remaining, S$2.5 million has been pegged for general working capital requirements and S$3.3 million for listing expenses.

Executive vice-chairman Lee Hung Ming will be the biggest shareholder after the placement, with a stake of 34.4%, followed by Wong with 9.2%.

ISEC does not have a formal dividend policy, but intends to pay out an annual dividend of no less than 25% of its net profit.

Shareholders’ equity stood at S$12.56 million. This gives ISEC a net asset per share of 2.78 cents, which will increase to 5.91 cents after the placement.