A home for all 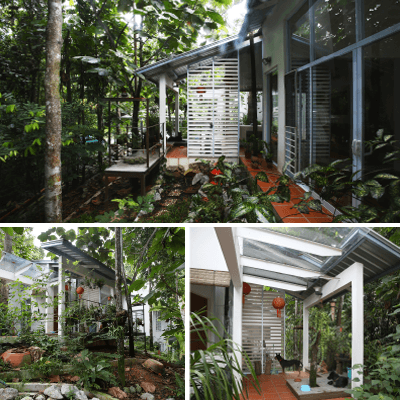 TAMAN EQUINE in Seri Kembangan, Selangor, benefits from a natural green embrace with the surrounding Ayer Hitam forest reserve, and it was this very lushness that drew Voon and his small family to seek residence there.

“My wife and I actually came to look at this place some 15 years ago as a younger couple, but we couldn’t afford it then,” says Voon, a father of two. Instead, they settled for a lovely home in nearby Taman Universiti with a view overlooking the meadows, but the neighbourhood began suffering from congestion with a lack of parking space being the primary nuisance.

In 2010, with his son and daughter pursuing their studies in Australia, Voon decided it was time to seek a new abode. He found the ideal plot of land — verdant and dense with foliage — in his dream community of old, still preferred for its proximity to the kindergarten his wife runs, and began designing the home he had always wanted.

“The natural setting was exactly why we chose this place, so we wanted to keep every tree intact if possible,” he says. That proved easier said than done, but Voon succeeded for the most part. One tree was lost during a storm; one accidentally knocked over by a bulldozer; and a third had to be cut down because he simply could not work it into his plan. He cannot be accused of not trying, however, a tiny courtyard was introduced in the very centre of the house to accommodate two strong trees, their trunks stretching out of the roof to greet the sun.

The first glimpse of the house is an enchanting one that hints at this warm welcome of nature into the home. An exterior porch is almost a formality — with a skeleton roof painted in white, it looks like a gazebo and serves more as a trellis than a shelter for the cars parked beneath it. Beyond the fence staking the perimeter of the property is an organic tangle of trees, plants and rocks that evoke charming rusticity.

Fiercely standing guard up the stairs that leads to the front door is Brandy, whose incessant barking alerts Voon of visitors. Canine companions Ellie and HeiHei are friendlier than their watchful counterpart, and all three roam freely throughout the house and the gardens when the family is home. As big as they might be, however, it is the five cats that rule the roost. A bundle of different personalities, they are for the most part curious and playful, lolling on whatever surfaces that catch their fancy.

“We only recently began keeping pets,” says their owner. “My son brought home two cats from the SPCA (Society for the Prevention of Cruelty to Animals) one day and that seemed to be the catalyst. My wife brought home three kittens and then the dogs came into our lives, either as strays or as puppies put up for adoption. We went from having no pets to eight in four years, and family conversation is so much the richer for their presence.” 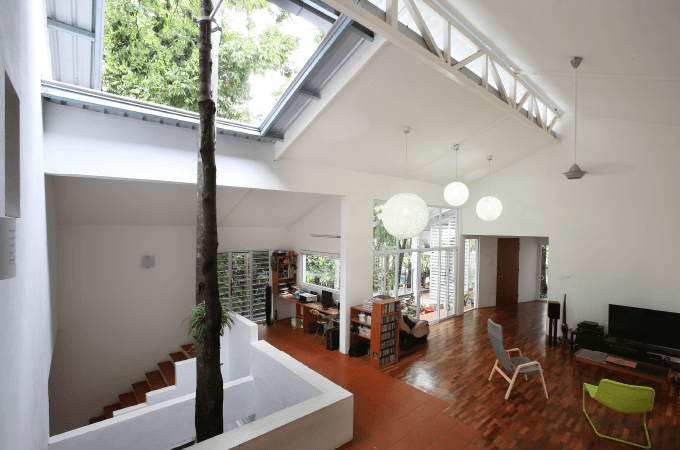 Obvious signs of the pets’ partial ownership of the house can be seen throughout: cushions and furniture legs bear deep scratches from the cats that naturally shun their own scratching posts in favour of these structures. “I’d never been a fan of cats prior to this but I’ve learnt to accept, and even like, them,” continues Voon. “We have fences and netting around the property to prevent them from running off into the forest.”

The living room is a simple space of soft colours and minimal furnishing. Most of the bedrooms are on a split level above, while his son has his own suite of sorts in the front of the house with a private entrance and a small yard. The surrounding green view is celebrated with high sliding doors, which also let sunlight flood in unimpeded during the day for natural lighting. The bedrooms are the only rooms shielded with curtains. Otherwise, the building of the house on what might be a shelf on a slope is such that the Voons are ensured of certain privacy — should the adjacent land be bought over and developed, the property would sit higher than their ground floor, retaining the illusion of relative isolation.

Down a short flight of stairs from the living room is a large open space that fulfils the functions of kitchen, dining area and potential guestroom when necessary. A foldable door, discreetly tucked away when not in use, can be opened to partition a portion of the flowing space for privacy. A daybed, covered to protect it from the indiscriminating claws of the cats, is currently being enjoyed by a napping feline. The entire floor is naturally lit by the blazing noon sun, whose light pours in through a sliding door that separates the spacious terrace. Out here, a large table stands in anticipation of al fresco meals. It is a lovely hangout spot for those willing to brave the omnipresent mosquitoes. “That’s the one thing we didn’t think through — the mosquitoes,” admits the homeowner with a laugh. “There are also spiders and termites to consider, and we once even found a scorpion in the kitchen. This is inevitable when you live within nature.”

Voon himself has three workstations around the house and he moves from spot to spot according to the time of the day to escape the sun’s glare while still enjoying its warmth and light. Each is a functional set-up of a worktable and computer, the one by the dining area especially pleasing in aesthetic for its unusual timber table. 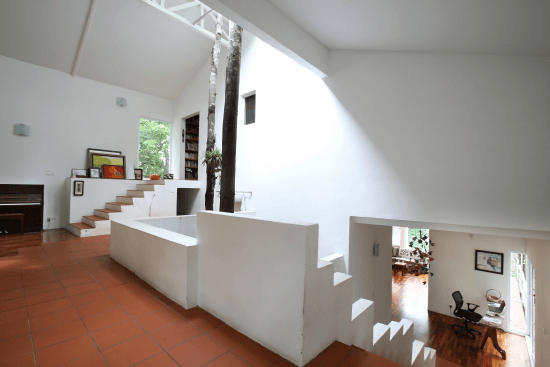 Construction took two years to complete from the ground up and Voon struggled to perfect the design. Apart from wanting to leave the trees unharmed and incorporating solar panels and a rain harvesting system, he insisted on natural ventilation, endowing the house with an open spine from one end to the other with a ridge and sloping ceilings to encourage air circulation. The continuous flow of cool air has seen the family turn on the air conditioning for maybe three hours in the two years they have been living there.

“Midway through construction, I had to change my philosophy and design,” he says. “There were just too many challenges, so I finally had to embrace the house as an experience, with no metaphorical straight lines. Rain splashes into the driveway and you can hear the raindrops on the roof loudly. I can’t speak for my family, but I quite enjoy the experience of going through the space.”

Voon describes his house as a work in progress, and he is currently attempting to build a deck in the corner of his foliage-dense property. “There is always something to be done but I like it this way,” he says. “My daughter once said something along the lines of ‘Houses are for self-expressions, not great impressions.’ I think that was very apt.”

It’s easy to understand Voon’s fondness for his new home. The surrounding green view is priceless, though it does come with its share of difficulties, and the interior spaces are modest and easy to navigate. This is a house with beautiful bones, built in an enchanting setting. And where a fussy homeowner would see threadbare furniture in need of replacement, Voon — as would any pet lover — sees a home enjoyed by all its occupants, be they two-legged or four-legged.