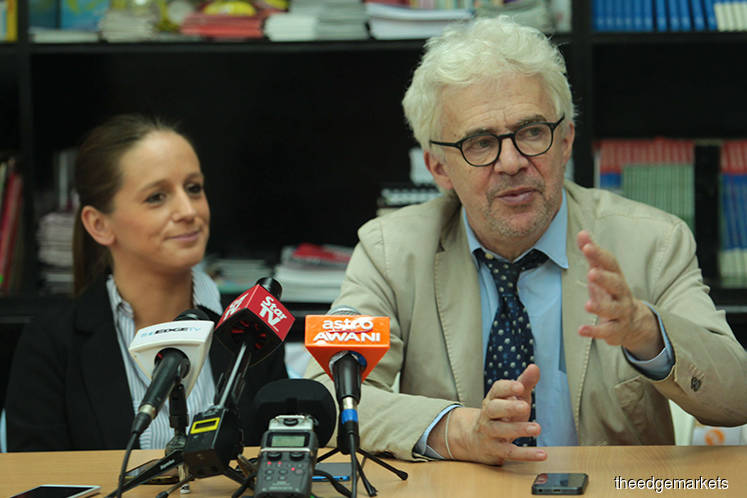 KUALA LUMPUR: The investigations into the alleged corruption in the purchase of two Scorpene submarines from France during Datuk Seri Najib Razak’s tenure as defence minister have hit a snag due to non-cooperation by the Hong Kong’s authorities, a lawyer claimed yesterday.

William Bourdon, the lawyer who represented rights group Suaram in filing a corruption complaint in a French court seven years ago, said the details of the bank accounts of a shell company called Terasasi (Hong Kong) Ltd remain key to shedding more light on the ultimate beneficiaries of the US$130 million commission in the submarine deal.

“One of the key issues or black hole of the case is Hong Kong. For the moment, the French judge has not gotten the Hong Kong authorities to execute the request for cooperation. The expectation of the judge is to access Terasasi bank accounts.

According to him, Terasasi was the entity that received the commission, and French investigations found that the shell company is 90%-owned by Najib’s former political aide Abdul Razak Baginda, with the remaining 10% owned by Abdul Razak’s father.

Bourdon said Hong Kong has not issued a formal refusal to cooperate with the French authorities to uncover the money trail so far, and hence he is hopeful that things may change eventually with the Malaysian authorities beginning their investigation into this case.

“Hong Kong has said they need more information again and again, but it is not impossible to say that they are trying to buy time,” he said.

Bourdon was deported arbitrarily by the Barisan Nasional government previously, after he provided a briefing on the development of the investigations into the Scorpene submarine deal in France during a fundraising event in Penang.

“We may say that it was a stupid decision to deport me, as it was kind of an indirect confession,” he said yesterday.

Bourdon said he is scheduled to meet the Malaysian authorities during his current visit, including the Malaysian Anti-Corruption Commission, Attorney General’s Chambers and Deputy Defence Minister Liew Chin Tong.

In 2009, Suaram filed a criminal complaint in France via Bourdon to call for investigation into the Scorpene submarine sales in 2002 by a joint venture between Thales Group and Naval Group (formerly known as DCNS Group) to the Malaysian government.

DCNS was accused of paying US$130 million in commissions to Perimekar Sdn Bhd, a subsidiary of KS Ombak Laut Sdn Bhd, in which Abdul Razak’s wife held a majority share.

So far, five individuals have been indicted in France — Abdul Razak and four former top executives in Thales and Naval.