His wealth surged by US$25 billion, then Jack Ma's rival quits 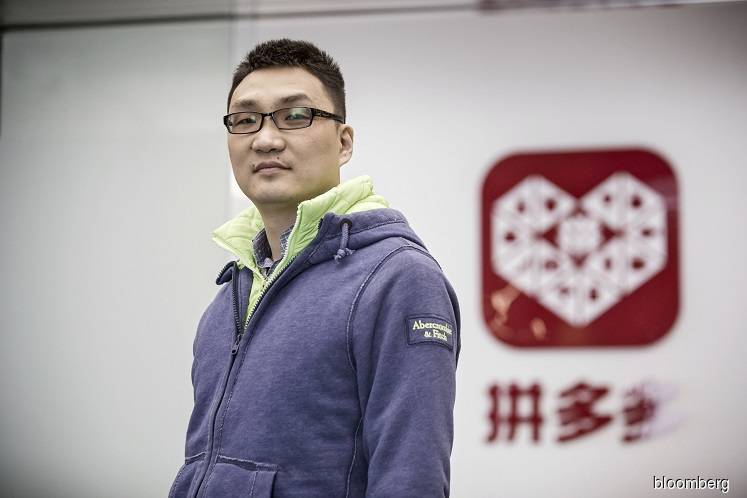 HONG KONG/NEW YORK (July 3): Colin Huang's ascent is one for the history books: In just six months, his fortune swelled by US$25 billion — one of the biggest gains among the world's richest people.

His Pinduoduo Inc (PDD), a Groupon-like shopping app he founded in 2015, has become China's third-largest e-commerce platform, with a market value of more than US$100 billion. In the first quarter, as the Covid-19 pandemic caused most of the nation's economy to grind to a halt, PDD's active users surged 68% and revenue jumped 44%, the company said in May.

Now Huang, who has overseen the firm as its American depositary receipts have more than quadrupled in less than two years, has stepped down as chief executive officer (CEO).

At one point, his net worth climbed as high as US$45 billion, placing him just behind China's wealthiest people — Tencent Holdings Ltd's Pony Ma and Alibaba Group Holding Ltd's Jack Ma — on the Bloomberg Billionaires Index. That is even as PDD continued to post losses, primarily because it chases growth with the help of generous subsidies and has been known to spend more on marketing than it earns in sales.

Huang, who controlled 43.3% of PDD shares, had reduced his stake to 29.4%, according to a June 30 regulatory filing. His fortune now stands at US$30 billion.

That excludes a US$2.4 billion charitable holding that he shares with PDD's founding team, and US$7.9 billion that went to Pinduoduo Partnership, of which Huang and newly named CEO Lei Chen are members. The partnership will help fund science research and management incentives, according to a letter following Huang's resignation. The wealth estimate also excludes US$3.9 billion that people familiar with the matter said was transferred to an angel investor.

PDD declined to comment on Huang's holdings or net worth.

He will remain chairman and work on the company's long-term strategy and corporate structure to help drive the future of the e-commerce giant, PDD said.

"PDD is still facing some high-level challenges in product supply, relationship with brand merchants, logistics, and payments," said Shawn Yang, an analyst at Blue Lotus Capital Advisors. "Colin may want to focus more on these issues."

PDD's success hinges on deals, which have become particularly popular with customers looking for bargains as the world's second-largest economy slows. Most of its users come from smaller Chinese cities, and the app gives them extra discounts when they recommend a product through social networks and get friends to buy the same item.

Fen Liu, a homemaker in Quanzhou, a provincial city in Fujian, said she accrued enough coupons with her friends' help to reduce the price of a suitcase to zero.

"I couldn't believe my eyes when I saw my suitcase arrive in the mail," she said. "It's made me a loyal Pinduoduo user ever since."

While PDD's aggressive price-reduction strategies have helped win over people with lower incomes, they may stifle the company's efforts to attract wealthier consumers, according to Charlie Chen and Veronica Shen, analysts at China Renaissance Securities in Hong Kong.

"PDD's users are largely bargain hunters reluctant to buy large-ticket items," they wrote in a note on Monday, adding that the company's image remains a key obstacle to users spending more. "We believe PDD is working to change its low-price brand image — but this could be costly."

That may require heavy marketing and hurt margins further despite a strong user-base foundation for future growth, the analysts said. And PDD's management has offered no clear path to profitability.

Last year, the company's "10 Billion RMB Subsidies" campaign, which is ongoing, led to a US$2 billion increase in sales and marketing expenses to US$3.9 billion, and those costs have been at 90% to 120% of revenue for the past two quarters, China Renaissance said.

Huang, 40, grew up in the eastern city of Hangzhou, where Alibaba has its headquarters. After receiving a degree at Zhejiang University, he went to the University of Wisconsin for a master's in computer science. He began his career at Google in 2004 as a software engineer and returned to China in 2006 to help establish its operations in the country.

He then became a serial entrepreneur. He started his first company in 2007, an e-commerce website called Ouku.com that he sold three years later after realising it was too similar to thousands of others. He then launched Leqi, which helped companies market their services on websites like Alibaba's Taobao or JD.com Inc, and a gaming firm that let users play on Tencent's messaging app WeChat. Both took off and Huang found himself "financially free", according to a 2017 interview.

After getting an ear infection, he decided to retire in 2013 at age 33. But following a year of pondering what to do with his life — he contemplated starting a hedge fund and moving to the US — he came up with the idea of combining e-commerce and social media. At the time, Alibaba dominated the online business, and WeChat became a must-have application on smartphones in China.

The tables have turned since. In 2018, Alibaba launched a PDD-style app in an attempt to lure smaller-town users with bargains. It came months before Huang took his company public in New York, raising US$1.63 billion in its July 2018 initial public offering. Since then, PDD has surged 389%, while Alibaba has gained just 13%.

In 2017, Huang said he was unlikely to spend the rest of his life at PDD. While he is still chairman of the company, he now wants to give more responsibility to younger colleagues to keep the entrepreneurial spirit as PDD matures, he wrote in a letter to employees.

"We envision Pinduoduo to be an organisation that creates value for the public rather than being a show-off trophy for a few or carry too much personal colour," Huang said. "This will allow Pinduoduo to continually evolve with or without us one day."