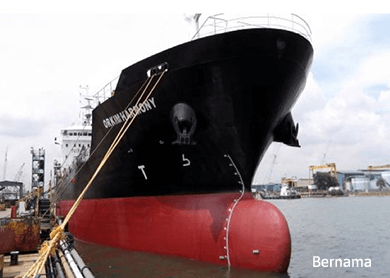 KUALA LUMPUR (June 19): The hijacked oil tanker Orkim Harmony is being shadowed by a Malaysian naval ship and has been redirected east to Indonesia's Natuna Island, and should arrive on Saturday, the Malaysian navy and media said on Friday.

State news agency Bernama quoted navy official Rear Admiral Azhari Abdul Rashid as saying the hijackers, reportedly armed with pistols and machetes, have made a request for a boat for their escape. Officials say the 22 crew are safe.

The hijacking is the second seizure of a tanker by pirates in Southeast Asia this month, raising further concerns over piracy in the region.

The 7,300 deadweight tonne (DWT) Orkim Harmony was hijacked on June 11 about 30 nautical miles from the Malaysian port of Tanjung Sedili carrying around 50,000 barrels of RON95 gasoline.

The Malaysia Maritime Enforcement Agency (MMEA) said the gasoline on the ship was owned by state-controlled oil and gas company Petronas.

The Orkim Harmony is operated by Malaysia's Orkim Ship Management. On board is a crew of 22, including 16 Malaysians, five Indonesians and one Myanmar national.

After the tanker was hijacked, the pirates repainted the ship and changed the name to Kim Harmon. Malaysia's Chief of Navy Admiral Abdul Aziz Jaafar says least eight pirates are involved.

The Malaysian naval vessel shadowing the tanker in Vietnamese waters on Thursday was trying to persuade the hijackers to surrender, says Jaafar.

Earlier this month, a 7,100 DWT oil tanker, Orkim Victory, carrying diesel loaded from Petronas was hijacked on June 4 in the same area and on the same route.

The Orkim Victory was later released by the hijackers after about 770 metric tonnes (6,000 barrels) of its cargo had been siphoned off.

However it will be difficult for the Orkim Harmony pirates to siphon off the gasoline as it is highly flammable and they are likely looking for proper facilities to do a ship-to-ship transfer, says MMEA.