Highlights of the Mid-Term Review of the 11th Malaysia Plan 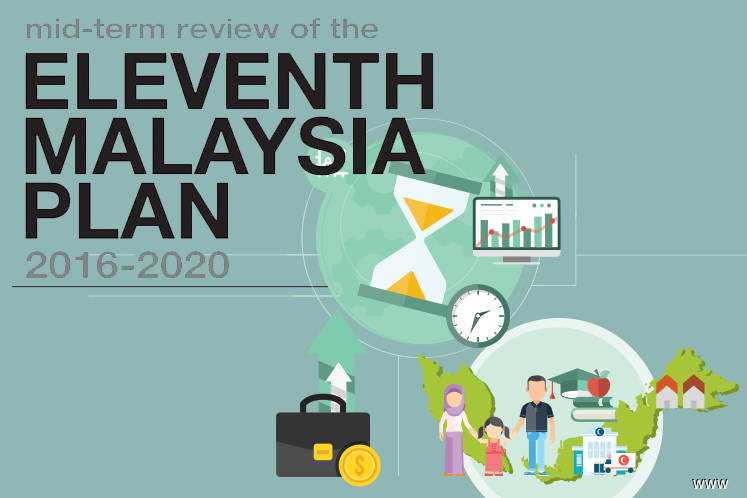 Below are the highlights of the Mid-Term Review of the 11th Malaysia Plan (2016-2020) Report, which is being tabled in Parliament today:

“The short-term growth trade-off is necessary to further strengthen the economy in ensuring more meaningful economic growth for the rakyat”.

Govt mulls digital tax on e-commerce biz
Thanks to the continued growth of e-commerce and sharing economy activities, the government will explore imposing tax on these online transactions.

Government tightens belt to invest less and spend less
The country will see a mild contraction of 0.6% in real public investment between 2016 and 2020, compared with the initial target of 2.7% growth.

Public consumption, meanwhile, is expected to grow moderately by 0.3% a year for the remaining 11MP period, with emphasis on optimising public expenditure without affecting the quality of public service delivery.

Private consumption the main growth engine, contributes 56.9% of GDP by 2020
Private consumption will continue to be a major source of growth and is expected to expand at an annual average rate of 7%, with the share to GDP reaching 56.9% in 2020.

Operating expenditure accounts for 98.9% of govt revenue 2016-2017
A total of RM427.9 billion was expended for operating expenditure during the review period. This was lower than the initial budget of RM430 billion due to the decline in oil-related revenue.

Fiscal deficit target may “temporarily be beyond target” to shore up growth
In the remaining 11MP period, the federal government will undertake measures to strengthen its medium-term fiscal position, among others by strengthening the management of public debt and accelerating institutional reforms.

However, fiscal targets will be flexible during the transition period of the new administration to shore up growth,” said the mid-term review released this afternoon.

Two-term limit for PM and state chiefs in the works
Malaysia is set to limit the term for the Prime Minister, chief minister and menteri besar to two terms in a bid to curb possible power abuse and corruption.

The excessive concentration of power in the Prime Minister before this has had a negative repercussion on the nation and has contributed to trust deficit among the rakyat, said the report.

This is part of its steps to address market distortion and unfair practices, in an effort to promote market efficiency and healthy competition in the economy.

Institutions to assist Bumiputera 30% corporate ownership target
The government will continue to emphasise Bumiputera participation in strategic investments towards achieving the target of at least 30% corporate equity ownership.

In this regard, Bumiputera institutions will continue to invest in high growth companies and companies listed on Bursa Malaysia as well as venture into potential companies as a minority shareholder, said the review.

Voting age to be lowered to 18
The government has agreed to lower the voting age to 18 from the current 21.

The scheme will provide assistance for primary care treatment for the B40 households to ensure comprehensive health coverage, said the review, without providing a timeline.

A total of 200,000 affordable houses targeted to build for the remaining 11MP period. This is in line with the objective to improve rakyat's wellbeing, under which efforts will be intensified to provide quality and affordable housing and increase home ownership.